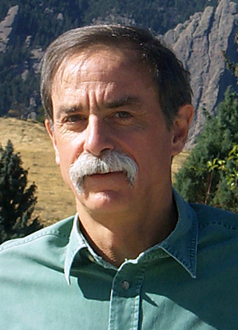 David J. Wineland, a lecturer in the University of Colorado Boulder physics department and physicist with the National Institute of Standards and Technology (NIST) in Boulder, on Tuesday won the 2012 Nobel Prize in physics.

Wineland is internationally recognized for developing the technique of using lasers to cool ions to near absolute zero. His experiments have been used to test theories in quantum physics and may lead to the development of quantum computers. He shares the prize with Serge Haroche of France.

Wineland becomes the fifth CU researcher to be honored with the Nobel Prize in science, following Tom Cech, who won for chemistry in 1989; Carl Wieman and Eric Cornell, physics, 2001; and John “Jan” Hall, physics, 2005.

“It’s kind of overwhelming,” Wineland said in a NIST news release. “This could have gone to a lot of other people. It’s certainly a wonderful surprise. The fellow I shared it with – he and I have been friends for a long time, so it’s nice to share it with him.”

“On behalf of the CU Board of Regents and the entire university community, congratulations to Dr. Wineland and his colleagues,” said Michael Carrigan, the board’s chair. “This distinct honor demonstrates the exceedingly high quality of the work being done at CU and in collaboration with our federal partners. We are very proud of our fifth Nobel Laureate.”

CU President Bruce D. Benson called Wineland’s Nobel a “testament to the quality of the discovery and innovation that makes the University of Colorado one of the top research universities in the world. It also highlights the value of our collaboration with federal laboratory partners such as the National Institute of Standards and Technology, as well as the tremendous opportunities for our students to work alongside the world's best scientists.”

Said CU-Boulder Chancellor Philip P. DiStefano, “This is an honor for our friends, colleagues and partners at the National Institute of Standards and Technology, the University of Colorado Boulder and for the world. That our university today has five Nobel Laureates walking our halls and interacting with our students is proof positive that the University of Colorado is a world-class institution.”

CU-Boulder Provost Russell Moore said Wineland’s Nobel Prize “underscores the strong relationships and quality of work among the research laboratories in Boulder, nearly all of which have strong ties to the University of Colorado. Our ability to share researchers and conduct research together has enormous benefits for new generations of CU students and young scientists, and has made Boulder a global center for cutting-edge research.”

Said Stein Sture, CU-Boulder vice chancellor for research, “CU-Boulder physics lecturer David Wineland’s work with our graduate students at the National Institute of Standards and Technology has placed him among a special group of scientists at NIST and CU who are changing the face of atomic, molecular and optical physics. We congratulate him, NIST and the CU-Boulder physics department.”

Beale, chair of the CU-Boulder Department of Physics, said the department is thrilled with the news of the Nobel.

“David's … research using trapped ions to study quantum entanglement, now recognized for the groundbreaking work it is by a Nobel Prize, acknowledges his great successes,” Beale said. “David is an important member of our graduate faculty who has been both a key graduate adviser for our students and a strong member of our graduate student recruiting team. His laboratory at NIST has allowed our graduate students to engage in world-class research, and it's an honor for our department to be associated with him.”

John Jost, who worked in Wineland’s group for about 10 years as a CU-Boulder doctoral student and postdoctoral researcher, called Wineland “brilliant and humble.”

“I feel lucky to have worked in his lab for my Ph.D. regardless of whether or not he won the Nobel Prize,” Jost said. “He was always available when we had questions and problems in the lab and usually had some great idea about what to try next. At the same time, he gave us the freedom to figure things out on our own.”

In August, Jost began a Marie Curie fellowship as a postdoctoral researcher in the École Polytechnique Fédérale de Lausanne in Lausanne, Switzerland.

Wineland’s first demonstration of laser cooling in 1978 led many other scientists to pursue the laser cooling and trapping of atoms. His research helped make possible the creation of the world’s first Bose-Einstein condensate, for which Wieman (of CU and JILA) and Cornell (of NIST, JILA and CU) were awarded the Nobel Prize in physics in 2001. JILA is a joint institute of CU-Boulder and NIST.

From NIST’s news release: Wineland was born in Wauwatosa, Wis., near Milwaukee. His family then settled briefly in Denver and when he was 3 moved to Sacramento, Calif., where he grew up. Wineland has worked at Boulder’s NIST laboratories since 1975. He received a bachelor’s degree in physics from the University of California at Berkeley and master's and doctoral degrees in physics from Harvard University. Before joining NIST, Wineland worked as a postdoctoral research associate at the University of Washington.