CU leaders are in the midst of much careful planning, but many unknowns remain. 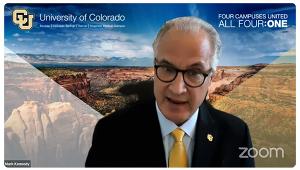 President Kennedy addresses the Board of Regents during Wednesday's Zoom meeting.

That was the message of President Mark Kennedy during the public portion of Wednesday’s Board of Regents meeting, held virtually via Zoom and livestreamed. A link to a recording of the meeting will be posted here.

Todd Saliman, vice president of budget and finance and chief financial officer, gave a presentation that provided a timeline of budget actions that the state and CU will be taking in the coming months. CU leaders are considering scenarios with varying degrees of budget impacts, all of them severe. 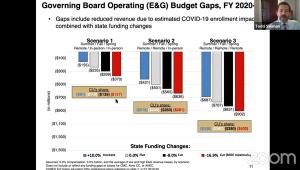 Gaps between revenue and operating expenses will be significant.

“Obviously we’re in for some revenue disruptions,” Saliman said. “The question is how deep those disruptions will be.”

CU has joined with higher education institutions across the state to articulate the broad impact of the COVID-19 pandemic and the accompanying economic downturn. Even after accounting for relief funding from the federal CARES Act, universities and colleges in the state have seen estimated additional expenses and losses of $274.1 million in the current fiscal year; CU’s share of that is $185.7 million.

Statewide, total revenue losses – not including potential state budget cuts – next year could range anywhere from $374 million to $2.15 billion; for CU, that could mean a range of $227 million to $1.1 billion in lost revenue.

The alarming figures continue when considering potential gaps between operations budgets and revenue combined with changes in state funding. Even if state funding remains flat in the coming year, CU could see a gap of $115 million to $360 million. A worst case, which assumes the maximum allowed cut in state funding, 16.9%, could mean gaps for CU of $157 million to $402 million.

As far as budget-balancing options, Saliman said, “the number of tools in our toolbox are limited.” The list includes:

Beginning Friday, CU leaders will be refining budget assumptions for the campuses, in anticipation of a May 19 Board of Regents vote on tuition, fees and compensation for the 2020-21 fiscal year.

The state’s Joint Budget Committee will convene Monday to begin the public portion of its budget-balancing conversation. Mid-May will see the release of updated revenue forecasts for the state, as well as the introduction of the budget in the Legislature. The governor will approve the budget at the end of May.

Throughout May and early June, the campuses and system administration will develop the 2020-21 budget, with the regents expected to consider it for approval on June 18. 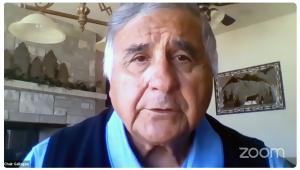 Board of Regents Chair Glen Gallegos

“There’s no getting back to normal,” Board of Regents Chair Glen Gallegos said. “I think we’re going to be deciding on what the new normal is.”

Tagged with:
Board of Regents, budget, coronavirus, President Mark Kennedy