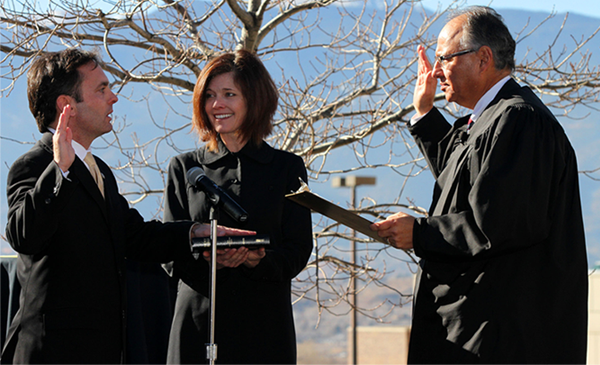 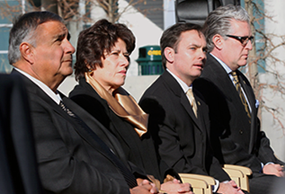 Typically, only three regents are sworn in at a time; because Regent Irene Griego is finishing the term vacated by Monisha Merchant, it meant four seats were up for election in November. It’s the first time since 1978 that four regents were elected at once.

Judge Gilbert A. Martinez, chief judge of the 4th Judicial District, administered the oath of office for three sitting members and one newcomer to the nine-member board, which is selected by Colorado voters. Terms are for six years. 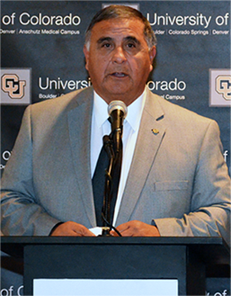 Regents who were sworn in during Wednesday’s ceremony, held outdoors on the Upper Library Plaza:

Glen H. Gallegos, 3rd Congressional District. The Grand Junction businessman and educator is new to the board, having won the seat vacated by Regent Tilman “Tillie” Bishop.

Irene C. Griego, 7th Congressional District. Griego won her first election to the board; she joined in 2011 after being appointed by Gov. John Hickenlooper. She will serve the final two years of the term first won by Merchant, who resigned to take a post with Sen. Michael Bennet’s staff. A longtime K-12 educator, Griego earned her bachelor’s degree at CU-Boulder and doctorate at CU Denver.

Kyle H. Hybl, 5th Congressional District. First elected to the board in 2006, Hybl returns for a second term. The senior vice president/general counsel 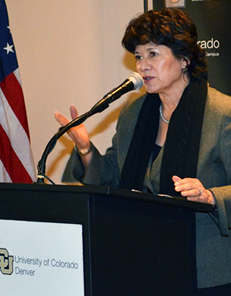 and trustee for El Pomar Foundation, he earned bachelor’s and law degrees from CU-Boulder and served as chair of the Board of Regents from 2010-12.

Stephen C. Ludwig, At Large. Ludwig, first elected in 2006, also won re-election. He was the first graduate of UCCS to be elected to the board. A longtime public relations, marketing and journalism professional, he served as vice chair of the Board of Regents from 2010-11.

“Holding the swearing-in ceremony for the Board of Regents at our Colorado Springs campus is a statement about how important UCCS is to the University of Colorado system and that we recognize the key role the campus plays for all of southern Colorado,” said Board of Regents Chairman Michael Carrigan. “It's an honor for us to hold this historic event on campus.” 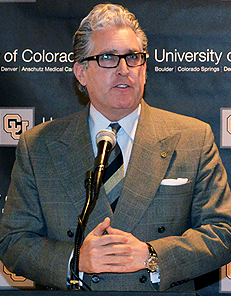 Tuesday night on the University of Colorado Denver campus, three of the four newly elected regents gathered with friends, family and members of the university community for a reception. The event provided an occasion for those who were unable to travel to Colorado Springs.