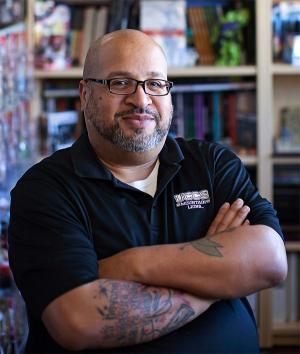 Let’s not beat around the bush: The for-profit academic journal system is a flawed scam, and as a university, we need to stop treating it like the end all, be all of publishing, particularly for emerging and early career scholars.

So much of the progress of scholarship that “counts” toward promotion and tenure is tied to publication in so-called “top-tier journals.” But make no mistake: Those journals are at the center of a completely corrupt system by which those who are exploited in the process are forced to beg to be a part of the process, complicit in their own degradation.

In no other enterprise are people asked to volunteer the products of their labor, which are then distributed by a volunteer to other volunteers for critique, then returned to the originator for more labor, which is then taken – for free – by a corporate entity that packages said labor product for distribution behind paywalls and subscriptions, the gains from which the originator of the labor will not see a single red cent. And we, in academia, force (through peer pressure and, at times, contractual obligation) scholars into participation in this system, because those publications “count” for more.

The value of peer review is didactically deemed as “worth” the exploitation of the process itself (although the intrinsic value of peer review in the first place is a constant source of debate; Richard Smith wrote quite an astounding piece in The Journal of the Royal Society of Medicine in April 2006 that castigates the entire flawed enterprise. Download it and read it; I am sure you are savvy enough to gain access beyond its paywall.). A new scholar who questions the relative value of peer review and for-profit journals, and pushes for distribution through alternate venues and practices, is often treated as though their work is empirically worse – even though such categorization is patently ridiculous.

One of my key research agendas, my most closely held platform, is that of knowledge democracy. The body of knowledge generated at universities in academia should not belong to, nor should it be solely distributed among, other academics. Every person in society should be free to learn, and the knowledge we generate in the university should be (in a perfect world) freely available to the citizenry. Every ounce of knowledge produced by the university that is hoarded behind an academic journal paywall is an affront to the very idea and mission of the university.

That is not to say that a scholar should always give away their intellectual property for free; only to say that under the current system, scholars are already pressured to give their intellectual property away for free, yet the knowledge is being given for free to a corporation who is then going to sell it, often to a marketplace in which many developing scholars are financially unable to purchase it.

When one submits the products of one’s labor to a for-profit academic journal, one is allowing a middleman to charge exorbitant fees for access to knowledge itself. Producing research is hard work; quality research takes hours and hours of study, writing, revision, editing and crafting. The business model of for-profit academic journals has quite literally no right to enclose and distribute the knowledge generated through that process without taking into account the labor involved in its creation. The article you have written is the direct product of actual work. You, as the author, deserve compensation for your labor. It can cost upwards of $50 for someone not affiliated with a university to download and read a journal article – how much of that $50 is paid to the author? To the editors? To the peer reviewers?

This business model also limits the access to knowledge to those in relatively wealthy communities that can afford journal access. For those scholars in less-developed countries, or in communities where scholarship is neither funded nor valued, they can be effectively locked out of learning by journal paywalls. It is completely unethical and undemocratic by design.

Although there has been a rise in alternative scholarship distribution venues – open-access journals, for example – those have been greeted with mistrust and condescension within many academic circles. Those journals lack so-called “impact factor,” an arbitrary measure of the reach of one’s academic work (a study in the biological sciences deemed impact factor to be “widely acknowledged [as] a poor indicator of the quality of individual papers, [although] it is used routinely to evaluate research and researchers” (Lariviere et. al. 2016).)

In the digital age, podcasting is easier to produce and more accessible than many venues for academic scholarship; distributing one’s work via podcast is often termed “creative work” rather than “scholarly activity.” According to multiple studies, the last person to read an academic journal article is often the editor who accepted it for publication. Podcasting gives instant, up-to-the-minute statistics of downloads and listens. In January alone, over 3,000 people downloaded and listened to episodes of my academic podcast, The Deconstruction Workers. How many people accessed and read your academic journal article last month? How would you even know?

Breaking the back of this unethical system will be neither easy nor quick. It relies on that most uncommon of virtues: a willingness to refuse to haze others in the way one has been hazed. It requires those of us who are established scholars (read: tenured) to say, “Enough is enough. We will not require new scholars to give their labor to corporations for free, even though that’s how we got tenure.” It will require established scholars to support alternative scholarship distribution, through open-access journals, podcasts, YouTube channels (watch three Lindsay Ellis videos and tell me she isn’t a “real scholar”) and the like. It will require us to rewrite our scholarship criteria for promotion and tenure in ways that no longer preference “top tier journals” that are exploitative by nature and design. Most of all, it requires established scholars to stop the practice of saying things like, “I did it this way. Why can’t you?”

Your own complicit exploitation should be no justification for encouraging others to allow themselves to be exploited.

When a new scholar asks where to publish a piece, instead of defaulting to The Journal of This is Where You Have to Publish to be Taken Seriously, encourage that scholar to publish as a book chapter – or, even better, to expand the work to a monograph so that they can be justly compensated. Encourage that scholar to speak rather than to wait for three other arbitrarily assigned “reviewers” to give them “permission” to speak. Encourage them to present that research at conferences, where reviewers are forced to give their feedback without the comfortable anonymity of “blind review” and have to say it to the scholar’s face. Then back that scholar when s/he includes the work on CVs, and in promotion and tenure documents, and on annual reviews.

There is an intrinsic asymmetrical power relationship in the world of academic publishing between those who produce labor and those who reap financial reward for that labor. In no other profession would one be expected to give 100% of one’s labor for zero compensation, as historically, that practice has been rightfully termed “slavery.” Although I, too, once subjected myself to this practice, I have not submitted to a for-profit journal in years – and have (now publicly) refused to ever do so again, regardless of what imaginary, so-called “tier” the journal exists in.

But that’s easy for me to say; I have tenure, and there are dozens of early career scholars in the University of Colorado system who do not. The most significant contribution that I can make to the academic profession is to use my position of relative privilege to attempt to dismantle the system of exploitation from the inside. We should not be beholden to the naked corporate self-interest of for-profit academic journal publishers, and we should protect our pre-tenure scholars from the idea that these types of journals are the only scholarship distribution venues that matter. Whether we have the nerve and the will to take up the challenge remains to be seen.

Christopher Bell, Ph.D., is an Associate Professor of Media Studies in the Department of Communication at the University of Colorado Colorado Springs. He specializes in the study of popular culture, focusing on the ways in which race, class and gender intersect in different forms of children's media. Recognized nationally for his expertise in the area of children's culture, he teaches both theory and methodology courses in critical analysis of popular culture, rhetorical theory, representation theory and the history of mass media. Bell is a TED speaker, a diversity and inclusiveness consultant for Pixar Animation Studios, a 2017 David Letterman Award winning media scholar, and the 2017 Denver Comic-Con Popular Culture Educator of the Year.

Eveleth, R. (2014). Academics write papers arguing over how many people read (and cite) their papers. Smithsonian Magazine. Retrieved from: https://www.smithsonianmag.com/smart-news/half-academic-studies-are-never-read-more-three-people-180950222/

The 10 most-read CU Connections features of 2022