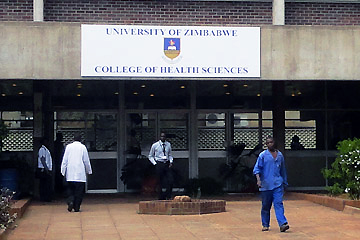 Over the course of several days, cardiology trainees from Zimbabwe observed as a University of Colorado Hospital patient with a heart condition was saved by a small pump routinely used in the United States — an Impella — implanted in his aorta.

“Back home, he would have died,” says Tsungai Chipamaunga, one of the physicians from Zimbabwe who are part of a broad collaboration with the University of Colorado’s Anschutz Medical Campus and Denver Campus to improve Zimbabwe’s medical education and care. “What is considered basic here is not available back home. Here, people don’t have to die.”

That’s just one glimpse into the partnership developing between the University of Zimbabwe — in a country whose health care system has been devastated over the past decade — and CU, which is trying to help fix the damage.

The doctors from Zimbabwe were the second cardiology group to visit University of Colorado Hospital (UCH) and Denver Health Medical Center as part of this project. Meanwhile, faculty members from the CU School of Medicine have been heading to Zimbabwe’s capital city, Harare, to review teaching methods and curriculum at the University of Zimbabwe College of Health Sciences, the country’s only medical school. CU physicians also are assessing medical training in the countryside and pondering whether to start an exchange program in internal medicine.

“I did interviews with doctors and students,” says Steven Johnson, M.D., a CU professor and AIDS expert at UCH, who recently traveled to Zimbabwe to explore ways to improve training in rural hospitals. “They were very positive about working to make things better.”

Doctors, including Tom Campbell, a CU professor specializing in infectious diseases, have been working on AIDS prevention and treatment in Zimbabwe for years. So when the National Institutes of Health (NIH) launched a broad initiative to address AIDS in Africa, medical leaders in Zimbabwe naturally turned to Campbell and others at CU for support and collaboration.

“It was an extension of what I had been doing,” says Campbell, who practices at UCH. “But also it was a great opportunity for us to enter a partnership that opens up research possibilities and gives us a chance to make an impact and to learn.”

CU is providing principal investigators for two grants the NIH awarded to the University of Zimbabwe in 2010. The grants are designed to improve medical education and research, generally, and in cardiology, specifically.

The broader grant is called NECTAR— Novel Education Clinical Trainees and Researchers. Stanford University is a partner in that grant. The other is called CHRIS for Cerebrovascular, Heart failure, Rheumatic heart disease Interventions program. (The University of Zimbabwe received a third grant, under which several other universities will work to improve mental health education in Zimbabwe.)

The first decade of the new millennium was tough for many African countries. Despite Zimbabwe’s high literacy rate, political and economic turmoil hit hard. The country’s medical school felt the pain. Some two-thirds of the medical school faculty left. Enrollment dropped. Doctors who trained in Zimbabwe departed for other countries, as did wealthier patients.

By 2004, the number of physicians per thousand was estimated to be one-sixteenth what it was in the U.S. Today, the average life expectancy in Zimbabwe is estimated at about 53 years, 209th in the world.

The NECTAR approach, Campbell says, involves basics, such as improving internet access, revving up the medical library, tuning up the faculty’s teaching skills and connecting the medical students with research.

Suzanne Brandenburg, M.D., a UCH physician and professor in the CU medical school’s Department of Medicine, has been to Zimbabwe five times as part of this program. Her role? Primarily, to teach the current and future teachers — the faculty and the residents who, it’s hoped, will join the faculty when they finish training.

Often, while in Zimbabwe, she’s in a classroom or at a meeting at the local Holiday Inn talking about fundamentals — curriculum, medical ethics, professionalism, stress management, end-of-life issues and student feedback.

“Some of the topics might seem basic,” says Brandenburg, director of the residency program for the Department of Medicine, “but those are skills and content that we teach here, too.”

“It’s hard to go on the wards and see people dying of things they would never die of here,” she says, unintentionally echoing Chipamaunga’s observation. But she sees hope in the improving medical education system there.

“They are super smart and talented,” Brandenburg says of her African colleagues. “They really believe in what they are doing.”

What they are doing is challenging. 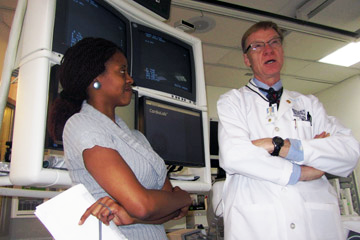 “They are trying to rebuild,” says cardiologist Ed Havranek, M.D., the principal investigator for CHRIS and a CU professor of medicine who practices at Denver Health. “We see it as a place with tremendous strength.”

Progress at the University of Zimbabwe College of Health Sciences already has been documented by the Evaluation Center of CU’s School of Education and Human Development, which is tracking the work:

On the other hand, the evaluation center found that most students are not satisfied with the education technology.

There’s more effort to come. In spring 2013, Johnson, one of the CU AIDS experts, made his first foray to rural parts of Zimbabwe, where medical students must train, to get that part of the grant into gear. Working and living conditions are “meager,” he says. Doctors in the field want more faculty development programs and fewer students per teacher. Telecommunications is and likely will remain a barrier.

Ryan Webb, M.D., a third-year resident in internal medicine and chief medical resident at the Veterans Affairs Medical Center in Denver, recently returned from three weeks at the medical school in Harare to explore an exchange program with internal medicine residents there.

Webb says the learning experience went both ways. “I did not want to swoop in and be the American who dictates how things go. I did a lot of listening.”

Webb learned how doctors and students there, lacking the advanced medical equipment common in the U.S, were extraordinarily skilled at physical exams.

And what do the Zimbabweans make of these Coloradans?

“It is a bit unexpected,” says Elise Gambahaya, another of the visiting cardiologists. “You do sort of wonder why and how somebody who is so far removed wants to be part of something.”

“Maybe,” her colleague Chipamaunga adds, “there are people driven to be part of something bigger than themselves.”

CU On the Air podcast: Navigating mental health issues during the pandemic

Send your thoughts and suggestions for the Newsletter.
END_OF_DOCUMENT_TOKEN_TO_BE_REPLACED