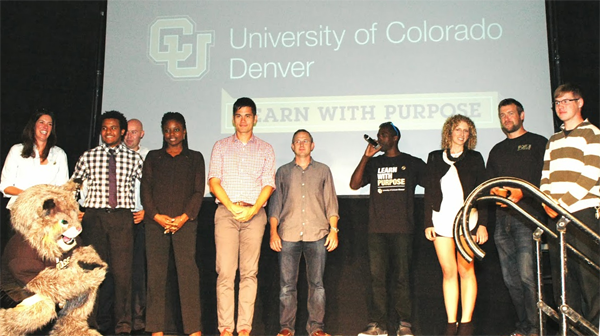 Students, faculty and staff who participated in the CU Denver advertising campaign join Robera Oljira (second from left), one of the TV spot stars, and Milo the Lynx on the stage. 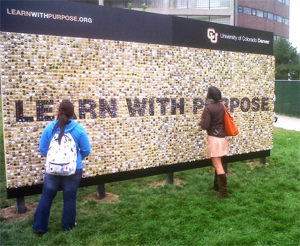 Nearly 700 members of the university community turned out to see CU Denver's first-ever TV spots and embrace the new tagline, "Learn with Purpose."

The comprehensive campaign, spearheaded by University Communications and more than nine months in the making, features TV commercials, print and online ads, billboards, buttons and bus signage, and much of it was on display at the Tivoli Turnhalle during Tuesday’s noon hour.

Milo the Lynx, who debuted just six months ago, welcomed Chancellor Don Elliman to the stage at the festive unveiling party.

"We're here to launch something that we hope puts a stake in the ground and begins to tell the story of what CU Denver is, what we stand for and what we're good at," Elliman told the large crowd. "In spite of the fact that we have a world-class faculty, a terrific student body and great programs in both undergraduate and graduate studies, there are a heckuva lot of people in this community who simply don't know much about who we are or even that we exist."

Leanna Clark, vice chancellor of University Communications, thanked her staff and all members of the CU Denver community, including more than 800 students, faculty, staff and community members, who participated in a feedback survey, for contributing to the unprecedented campaign. "The input you gave us really helped us refine how we tell our message -- that was critical," she said. 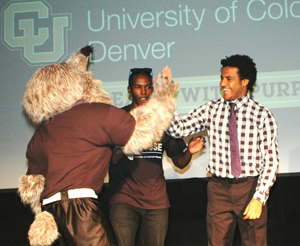 Robera Oljira, CU Denver biology student and star of one of the new TV ad spots, high-fives Milo the Lynx during the advertising campaign launch party at Tivoli Turnhalle. Emcee Thomas Evans is pictured at back.

Billboards greeted students at Larimer and Speer and also in the Turnhalle with thousands of buttons with clever phrases, such as "Hire Educated" and "Smarter than your average Bear, Pioneer or Ram." As students pulled the pins from the board, it revealed the message, "Learn with Purpose."

"We really want you, our University community, to embrace 'Learn with Purpose' and make it your own," Clark said. "Help it live outside of the advertising campaign because we really think it speaks to who we are."

The campaign, which involved Denver advertising agency Karsh/Hagan, is part of a long-term effort to raise CU Denver's profile and strengthen its brand as a world-class research university in a vibrant urban environment. At today's campaign unveiling, students stepped into video booths to offer what "Learn with Purpose" means to them. They enjoyed burritos, smoothies, T-shirts, buttons and goofing with Milo.

Jeff Exstrum, university brand and design manager, said participation in the casting call was "great. The fact that, out of 22 people cast in the spots, only one is not associated with CU Denver is pretty sweet."

Karen Klimczak, university marketing manager, said today's celebration had an "amazing" turnout. "We have not only students here in large numbers but also faculty and staff. I think it's a great statement for CU Denver in terms of identifying who we are. It had a great energy and vibe."

She noted that students, faculty and staff also responded to the interactive button walls. "They are choosing buttons that really speak to their personal experiences at CU Denver."

Kitila Beyan, a junior studying public health, watched as Robera Oljira, his friend and fellow student from Ethiopia, enjoyed his moment in the spotlight for starring in one of the TV spots.

"It was really very nice and very interesting," Beyan said of the ad. "I'm very appreciative, too, of the ads featuring people from different backgrounds. It gives encouragement to others."

The TV spots received applause and whoops of enthusiasm after being screened. "They bring out more of what CU Denver is," said Kimanh Nguyen, a senior in biology. "They tell the message that nobody seems to know -- that we have our own sense of uniqueness. So this advertising helps a lot."

Rebecca Ward, manager of new media in the Business School, said she enjoyed the poetry slam-style cadence of the TV ads. "I got the sense of poetry making a statement, and it felt very modern," she said. "Also, I think the idea of 'Learn with Purpose' is really at the heart of what we're trying to do here at CU Denver."

Send your thoughts and suggestions for the Newsletter.
END_OF_DOCUMENT_TOKEN_TO_BE_REPLACED