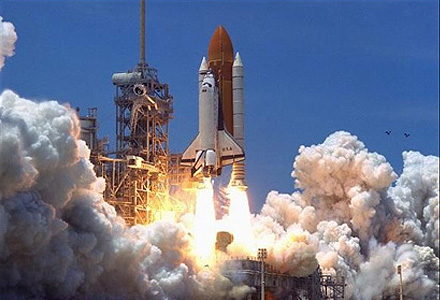 When NASA's 30-year-old space shuttle program is shuttered following the Atlantis mission this month, the University of Colorado Boulder will look back at a rich relationship filled with triumph and tragedy and look ahead to an evolving international program of government and private efforts that will send humans and cargo into orbit.

Of the 19 astronaut-affiliates from CU – 18 from CU-Boulder and one from the University of Colorado Colorado Springs – 16 flew on a total of 40 NASA space shuttle missions. The two who flew the most shuttle missions – five each – were Jim Voss (master's in aerospace engineering, 1974), a current scholar in residence at CU-Boulder, and Marsha Ivins (bachelor's in aerospace engineering, 1973).

Vance Brand, a Longmont native with two CU-Boulder degrees (bachelor's in business, 1953, and bachelor's in aerospace, 1960), began his astronaut career with the Apollo program: He flew on the historic Apollo-Soyuz mission that brought together astronauts and cosmonauts in space in 1975 – and went on to command three space shuttle flights.

Two CU-Boulder astronaut-alumni died aboard space shuttles. In 1986, Ellison Onizuka (bachelor's and master's in aerospace engineering, 1969), was killed when Challenger exploded 73 seconds after liftoff, an event witnessed by millions around the world. In 2003, Kalpana Chawla (Ph.D. in aerospace engineering, 1988) died when Columbia disintegrated over Texas during Earth re-entry.

A celebrated university reunion in space occurred Dec. 2, 1990, when Columbia blasted off with three CU astronaut-alums. Brand, the Columbia space shuttle commander, was joined by mission specialist John "Mike" Lounge (master's in astrogeophysics, 1970) and payload specialist Sam Durrance (Ph.D. in astrogeophysics, 1980) as part of the seven-man crew on the ASTRO-1 mission. Toting four telescopes in the cargo bay, the shuttle mission was the first ever dedicated to astronomy.

Besides its prominent role in the astronaut program, CU-Boulder has flown dozens of science payloads on NASA's 135 space shuttle missions. BioServe Space Technologies, a NASA-funded center in the aerospace engineering sciences department, has launched experiments onboard space shuttles 39 times since 1991, using the low-gravity of Earth orbit as a testing ground for a variety of agricultural, biomedical and educational payloads.

BioServe has worked with industrial and academic partners on experiments ranging from bone loss mitigation and the development of new antibiotics to K-12 educational payloads involving butterflies and spiders that drew the participation of more than a million students around the world. BioServe personnel have trained dozens of astronauts to operate their experimental hardware in space, on the shuttle and the International Space Station.

NASA space shuttles also toted two key instruments developed by teams led by CU-Boulder faculty for the Hubble Space Telescope. The launch of Hubble aboard Atlantis in 1990 included a high-resolution spectrograph designed and built by a team led by CU-Boulder retired Professor John "Jack" Brandt of the Laboratory for Atmospheric and Space Physics. The instrument broke down wavelengths of light emanating from distant celestial objects to determine their compositions, motions and temperatures to help astronomers understand the conditions of the early universe.

Fittingly, the final Hubble repair mission launched in 2009 included a $70 million instrument designed by a CU-Boulder team and constructed with the help of Boulder's Ball Aerospace and Technologies Corp., which also built the high resolution spectrograph launched on Hubble in 1990. Known as the Cosmic Origins Spectrograph, the CU instrument is being used to probe the fossil record of gases in the early universe for clues to the formation and evolution of galaxies, stars and planets, according to principal investigator and CU-Boulder Professor James Green of the Center for Astrophysics and Space Astronomy.

In 1989, the space shuttle Atlantis carried NASA's Galileo spacecraft into orbit, the first leg of a six-year journey to Jupiter and its moons. The science instruments included two CU-Boulder ultraviolet spectrographs designed and built by LASP at a cost of $3.5 million under the direction of retired Professor Charles Hord and which were used for research ranging from analyzing complex organic molecules in the Jovian system to documenting the activity of volcanoes on one of Jupiter's moons, Io.

In 1991, Discovery launched the Upper Atmosphere Research Satellite carrying seven instruments, including an $8 million instrument called the Solar Stellar Irradiance Comparison Experiment, or SOLSTICE, designed and built by LASP. The satellite went on to make accurate measurements of the sun in the ultraviolet and far UV light for a full 11-year solar cycle, allowing scientists to better understand the effects of solar radiation on Earth's atmosphere and climate, said SOLSTICE Mission Manager Tom Sparn.

CU-Boulder's LASP also built and flew two space shuttle payloads – one in 1998 aboard Columbia and a second in 2001 on Endeavour – that enabled scientists and students to explore the gentle collisions of particles of dust in space. The experiment provided new insights into the fundamental processes thought to have helped form planetary rings and perhaps played a role in the earliest stages of planet formation.

In addition, a small satellite designed and built by a LASP team that was to be deployed from the Challenger space shuttle in 1986 to orbit Earth and observe Halley's comet was lost during the tragic explosion.

CU also flew experiments targeting the mechanics of granular material three times on space shuttles – in 1996, 1997 and 2003. Led by civil, environmental and architectural engineering Professor Stein Sture, now CU-Boulder's vice chancellor for research, and managed by LASP, the tests enabled scientists to observe the behavior and cohesiveness of granular materials in microgravity and have led to a better understanding of how Earth's surface responds during earthquakes and landslides. The 2003 mission successfully returned data from the in-flight experiments, but the seven astronauts and experimental hardware were lost when Columbia disintegrated during re-entry.

CU-Boulder's involvement with the space shuttle program also included three payloads designed, built and flown by students, primarily undergraduates, from the Colorado Space Grant Consortium headquartered in aerospace engineering sciences. The first payload, dubbed ESCAPE, which flew on Discovery in 1993, measured the sun's effects on Earth's atmosphere using a spectrometer to record extreme UV solar radiation and a camera to photograph the sun. The effort included the participation of nearly 100 students, primarily undergraduates, over a two-year span.

A third CU-Boulder student-built space shuttle payload known as DATA-CHASER, was a two-part experiment launched aboard Discovery in 1997. The payload included hardware to test advanced remote technologies, as well as instruments to measure the sun in far UV wavelengths. DATA-CHASER was designed and built and tested by dozens of CU-Boulder students, primarily undergraduates, over a three-year span.

So what's on deck at CU-Boulder following the end of NASA's space shuttle program, in terms of both manned and unmanned flight vehicles? Hardware and experiments developed by BioServe already are manifested on various international resupply vehicles traveling to the International Space Station as well as on U.S. spacecraft now under development, said BioServe Director Louis Stodieck.

CU-Boulder also is involved in a research partnership with Sierra Nevada Corp. of Louisville, Colo., which is designing and building a manned spacecraft, the Dream Chaser, intended to replace the space shuttle for transporting people and cargo into low-Earth orbit. Sierra Nevada has received about $200 million in NASA contracts to design and build the vehicle, which will be launched vertically and can land on conventional runways.

As part of its collaboration, Sierra Nevada is funding a CU team led by Klaus to develop methods for evaluating safety and operational aspects of the spacecraft. Klaus' lab has a mock-up cockpit section of the Dream Chaser being used to test the ergonomic layout for instrument displays and controls. The students on the project are being advised by CU-Boulder's Voss – who also is a vice president at Sierra Nevada Corp. – and his colleague Joe Tanner, both of whom joined the CU-Boulder faculty after retiring as NASA astronauts.

CU-Boulder currently is housing a full-scale mock-up of the Dream Chaser based on an earlier design of the spacecraft, as well as a 15-percent scale model, that was successfully flight tested by a team including Sierra Nevada engineers and CU aerospace engineering faculty and students in December 2010. The hope of Sierra Nevada and CU-Boulder is that the Dream Chaser will provide routine crew transportation to and from the International Space Station as NASA turns its focus to deep space exploration missions.

In December 1990, when the space shuttle Columbia launched, Commander Vance Brand took with him a 10,000-year-old Paleo-Indian spear point that had been discovered on Colorado's eastern plains. One wonders what the thundering liftoff of a NASA space shuttle might have looked like through the eyes of the earliest Americans, and what the next 10,000 years holds for human exploration of space in the solar system and beyond.

For more information visit the "CU in Space" website at http://www.colorado.edu/news/reports/space/.