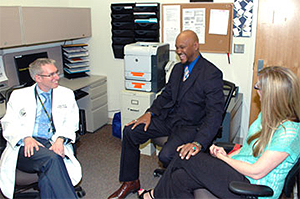 Lung cancer patient Michael Moore got a dose of good news last month. He learned that a clinical trial drug, which has helped him and other patients, received "breakthrough therapy" designation from the Federal Drug Administration.

"Life doesn't end when you have cancer," said Moore, who has been fighting the disease for two years and has received care at Anschutz Medical Campus since December. "This has given me hope—so that's good. When you have cancer, hope is the biggest thing."

A group of pioneering Coloradans met at University of Colorado Hospital (UCH) last month to recognize how the speeding of drug approvals by the FDA can potentially deliver life-saving results for cancer patients. They represent a combination of medical expertise, biotech entrepreneurship and political perseverance that are at the center of Moore's hope.

Camidge, associate professor of medicine/oncology and director of the Thoracic Oncology Clinical Program in the CU School of Medicine, said he is treating about 20 lung cancer patients with CO-1686. "We are one of the major centers for doing lung cancer trials in the country, if not the world," he said.

Camidge showed Bennet X-rays of a patient's lungs after treatment with the drug. Tumors showed noticeable reduction in size, even disappearance, after several weeks on the therapy. 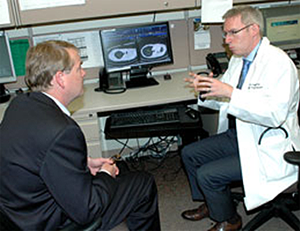 Colorado is extremely fortunate to have a world-class cancer center in its backyard, he noted.

"When you take Sen. Bennet's creation of 'breakthrough status,' which can speed drug approvals through the FDA, and combine it with the incredible synergy of our local biotech companies partnering with our cutting-edge clinicians and scientists to develop brand-new treatments, you get enormous benefits," Camidge said. "The companies benefit, but more importantly, so do cancer patients in Colorado and across the country."

Bennet said a discussion he had at the Anschutz Medical Campus, along with FDA Commissioner Margaret Hamburg, led to the legislation. Also attending the roundtable in 2011 were physicians, researchers, bioscience and medical device representatives, academics and patient advocates. "They told us, 'We're encountering delays and bureaucratic responses from the FDA, and we're really worried that we're going to lose this business to other countries," Bennet said. "So we went to work on this legislation to create a new pathway called 'breakthrough therapies.'"

When the bill passed two years ago, Bennet said, observers predicted that only a couple of drugs would be on a fast-track by now. "There are actually 44 on the pathway and six have been approved, including drugs to treat cystic fibrosis, leukemia and other kinds of cancer," he said.

Bennet emphasized that "there are people all over Colorado who are inventing ... potentially life-saving drugs" and that these jobs need to stay in the state. "These companies pay very good wages," he said. "We can't have regulatory absurdity creating a situation where we're driving jobs away. Today, we're seeing a great example in Colorado of a company that's seizing the future, that's growing, that's paying good wages and it's saving people along the way."

Camidge said the CU Cancer Center's superb reputation allows it to get trial drugs that are early in development, such as CO-1686.

"We already have people flying to Colorado to get second opinions and be treated from almost every state in the United States," he said. "What all of this means is that the wider community of cancer patients around the country can ultimately benefit from what we discover together even sooner."

Camidge said drugs that are effective against the biology of certain cancers—personalized medicine—help cancer patients to live their lives normally again. He has encouraged Moore, who has never smoked, to get back into his previous career of coaching basketball and teaching in Pueblo.

"This is the best part," Camidge told Bennet. "Michael started the trial in December and he proposed to Erin (Keaney, his longtime girlfriend) after being on the trial. At which point the first thing I asked him was, 'What took you so long?'"