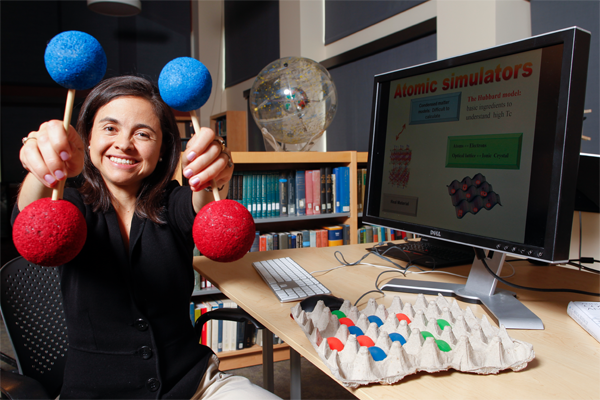 Ana Maria Rey, a theoretical physicist and a fellow of JILA, a joint institute of the University of Colorado Boulder and the National Institute of Standards and Technology, on Wednesday was named a winner of a 2013 MacArthur Fellowship, commonly known as the “genius grant.”

Rey also is an assistant research professor in the CU-Boulder Department of Physics. She teaches undergraduate and graduate classes.

Rey is the ninth faculty member across the CU system – and eighth from CU-Boulder – to win the prestigious award from the John D. and Catherine T. MacArthur Foundation of Chicago. She also is the fourth physics faculty member and third JILA fellow named a MacArthur Fellow.

“It is a great honor for me to be a MacArthur fellow and to receive such great recognition of my work,” Rey said. “I want to thank JILA, NIST, CU-Boulder and the outstanding group of colleagues, collaborators and students who have allowed and helped me to accomplish the research I have done.”

The MacArthur Foundation selection committee cited Rey as an “atomic physicist advancing our ability to simulate, manipulate, and control novel states of matter through fundamental conceptual research on ultracold atoms.”

“We congratulate Professor Rey on this exciting award, and, we also congratulate our faculty, whose ranks now include five Nobel laureates and eight MacArthur Fellowship winners,” said CU-Boulder Chancellor Philip P. DiStefano. “I believe Professor Rey’s work is emblematic of the research, innovation, and discovery at CU-Boulder, a body of work and a collection of great minds that is unmatched anywhere in the Rocky Mountain region and few places around the nation.”

Tom O’Brian, chief of the NIST Quantum Physics Division and Rey’s supervisor, said, “Ana Maria has rapidly established herself as one of the world’s top young theoretical physicists. She has a special ability to make very practical applications of theory to key experiments. Ana Maria has been crucial to the success of such world-leading NIST/JILA programs as ultracold molecules, dramatic improvements in optical lattice clocks, and use of cold atom systems and trapped ion systems for quantum simulations.”

Ultimately, Rey hopes her research will lead to the ability to engineer materials with unique characteristics such as superfluids — liquids that appear to move without regard for gravity or surface tension — and quantum magnets — individual atoms that act like tiny bar magnets.

Rey began studying physics at the Universidad de los Andes in Bogota, Colombia, where she received a bachelor’s degree in science in 1999. She came to the United States to continue her studies, earning a doctorate in physics from the University of Maryland, College Park, in 2004.

Before coming to JILA in 2008, Rey was a postdoctoral fellow at the Harvard-Smithsonian Center for Astrophysics in Cambridge, Mass., and a postdoctoral researcher at NIST in Gaithersburg, Md.

Previous CU-Boulder faculty members who have won a MacArthur Fellowship include David Hawkins of philosophy in 1981, Charles Archambeau of physics in 1988, Patricia Limerick of history in 1995, Margaret Murnane of physics and JILA in 2000, Norman Pace of molecular, cellular and developmental biology in 2001, Daniel Jurafsky of linguistics and the Institute of Cognitive Science in 2002 and Deborah Jin of JILA, NIST and physics in 2003. Eric Coleman, M.D., of the University of Colorado School of Medicine won last year.

“Everyone at JILA is extremely proud of Ana Maria Rey’s accomplishments and wholeheartedly congratulate her for this prestigious MacArthur Fellowship,” said JILA Chair Murray Holland. “She has an incredibly quick mind for physics and is one of the truly creative and ingenious scientists of her time, while also being a wonderful teacher and mentor to both undergraduate and graduate students. This is a great honor for Ana Maria, and a tremendous recognition of the important research programs in JILA and NIST.”

Rey is a highly effective mentor for an unusually large group of graduate students and postdoctoral fellows given the early stage of her career, O’Brian said. One of her recent graduate students, Michael Foss-Feig, won the prestigious 2013 Best Thesis Award of the American Physical Society’s Division of Atomic, Molecular and Optical Physics. Rey herself won the same award in 2005 as a graduate student at the University of Maryland.

On Tuesday, in another honor, the American Physical Society named Rey the winner of the 2014 Maria Goeppert Mayer Award, which recognizes outstanding achievements by a woman physicist in her early career.

More information on Rey is available on the Web at http://www.macfound.org/fellows/901 and http://jila-amo.colorado.edu/science/profiles/ana-maria-rey.