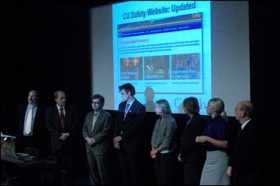 Representatives of the city of Boulder and CU-Boulder, including student leaders, announce new safety initiatives at a recent presentation on campus.

The University of Colorado at Boulder is adding six more campus police officers and will improve campus lighting and transportation systems among other initiatives as a result of a survey conducted by a leading student advocacy group and a partner safety coalition.

With the survey, the University of Colorado Student Union (UCSU) and the Safety Initiatives Coalition attempted to gather information that would facilitate the design and implementation of strategies aimed at increasing campus and communitywide safety, said UCSU Tri-Executive Tom Higginbotham.

"We're focusing our efforts on strengthening the relationship between UCSU and the administration, which will help us to tackle these and other tough issues with improved communication, collaboration and coordination," the student leader said during a news conference on Aug. 20 to announce the survey results and recommended safety improvements.

The Safety Initiatives Coalition, a collaborative group of representatives from both CU and the city of Boulder, assisted with the online survey in March. The survey's main themes were lighting maintenance, parking and transportation, police visibility, reporting concerns and communication.

Higginbotham said student leaders were inspired to survey attitudes about campus and community safety following a series of off-campus assaults in 2008.

Among the other conclusions:

"We've identified several ways to make better use of existing infrastructure while at the same time providing safer options for students," said Frank Bruno, vice chancellor for administration. "The student government and Safety Initiatives Coalition have played a key role here, helping us to identify potentially unsafe areas on campus in terms of lighting, foliage and other factors."

Bruno said the Boulder campus would respond to survey suggestions with pre-existing programs and new ideas. He said the Preventative Maintenance Program, which is managed by the Office of Facilities Management, would increase its efforts to check designated lighting zones to ensure there are no dark areas on campus.

"We had been checking these areas, but on an irregular schedule," Bruno said. "The students were helpful in identifying that the irregular evaluation schedule was having a possible impact on safety, so we're grateful to them for helping us make that improvement."

The campus will implement other safety strategies such as the creation of a police platoon system, which will take at least two years to reach its potential because training is extensive. Bruno said the addition of six new campus police officers would enable the campus to enhance community policing, increase the training of officers and expand officers' abilities to interact with the community.

The CU Police Department, in collaboration with UCSU, also is considering a campus safe-transportation pilot program to increase security presence throughout the campus while simultaneously providing transportation for members of the campus community engaged in late-night academic or work-related activities. To address concerns about late-night parking options, the CU-Boulder Parking and Transportation Services department is reviewing options for parking near Norlin Library to accommodate the library's new hours.

Other late-night parking possibilities include a parking permit for nearby lots, extending the hours of the Euclid Avenue Autopark, and providing short-term, after-hours parking along Colorado Avenue, Bruno said.

UCSU also announced that the Bystander Intervention program began during New Student Orientation 2009. The program encourages student to take responsibility for the safety of their peers, and teaches them collaborative skills.