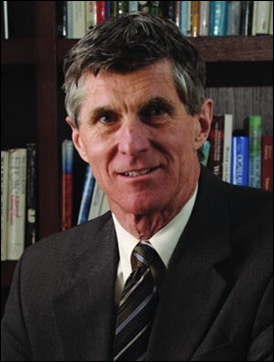 Longtime University of Colorado Law School Dean David Getches, who had stepped down June 30 in order to return to the school's faculty, died Tuesday, July 5. He was 68.

"On behalf of the entire University of Colorado community, I wish to express my deepest and heartfelt condolences to the family and friends of David Getches," said Chancellor Phil DiStefano. "David provided exceptional leadership as dean of the Law School for close to a decade and had an outstanding career as a scholar and teacher. He will be greatly missed as a friend, colleague and member of the CU community, as well as by members of the legal profession throughout the United States."

Getches served as dean of Colorado Law from 2003 to 2011. Under his leadership, the university financed and constructed the $46 million Wolf Law Building and expanded the academic offerings at the law school, which include an endowed Experiential Learning Program, three master of laws degrees, three legal clinics, three certificates and eight dual degrees.

"David Getches came along at exactly the right time for the American West, which has undergone such sweeping changes over the past half-century," said Charles Wilkinson, Moses Lasky Professor of Law and longtime friend. "As a wise advocate and leading public intellectual, David brought vision, common sense and passion to pressing issues of water, land and Indian rights. Now Indian tribes, universities, government offices, conservationists and the rivers themselves will grieve aloud. We will not see his kind again."

Phil Weiser, who took over as dean of Colorado Law on July 1, said, "David leaves a remarkable legacy of integrity and commitment to excellence. All of us in the Colorado Law community will miss him greatly and I will miss him dearly as a mentor and a friend. His memory and spirit will remain a blessing to us all."

From 1983 to 1987, Getches was executive director of the Colorado Department of Natural Resources under Gov. Richard D. Lamm. Getches earned his undergraduate degree from Occidental College in California and his law degree from the University of Southern California School of Law. He began his legal career in 1967 with the law firm of Luce, Forward, Hamilton and Scripps in San Diego. In 1968, he was co-directing attorney for California Indian Legal Services; in 1970, he moved to Colorado to become the founding executive director for the Boulder-based Native American Rights Fund, a national, nonprofit Indian-interest law firm.

A memorial service for Getches is being planned and will be announced at a later date.

Contributions may be sent to the David H. Getches Scholarship Fund. Additional information is available at www.cufund.org/GetchesScholarship.