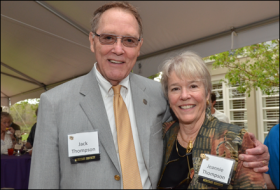 Jack ('64, '70) and Jeannie ('64) Thompson are volunteer chairs of the Creating Futures campaign for CU-Boulder, and in March made a transformative gift to endow the Jazz Studies program.

Some 200 Boulder campus faculty, staff and fundraisers — most of whom make financial gifts to the University of Colorado — gathered Friday at Chancellor Philip DiStefano’s home for a late afternoon reception to celebrate faculty and staff.

Furman spoke about a student of his—law alumnus Daniel Barash (’02), whose life was tragically cut short in 2004. After working with family members to create the Daniel Barash Scholarship Fund, he made gifts and helped raise money from others. The scholarship fund, which now exceeds $800,000, benefits CU law students with a career interest in criminal defense for the indigent.

“I give to education because it’s my belief that it’s the single most important institution that makes democracy work,” he said.

In all, $1.4 billion in private support has been generated toward Creating Future’s $1.5 billion goal.

Tate Nelson, development associate for CU-Boulder Athletics, spoke about the opportunity he has to make the university better every day.

“There is no other part of my life that has had such a great impact as my four years here,” he said. “We talk so much about finding our donors’ passion—I remember when I made that first $500 check out to CU.”

Nelson introduced scholarship recipient Anne Stuller, a forward on CU women’s soccer team and 2012 Pac-12 Academic Honorable Mention honoree. She reflected that the scholarship has given her a renewed sense of discipline and determination while she completes her degree.

DiStefano recognized donors who have made planned gifts such as real estate, which can help CU now and in the future. He also mentioned the Esteemed Scholars Program—a new initiative that awards scholarships to top Colorado high school students who choose to attend the University of Colorado Boulder.

“You don’t just give to institutions—you invest in the ideas and people in whom you believe,” he said.

To give back to CU via payroll deduction, visit cufund.org. To learn about ways you can support CU in the future through a planned gift, visit cufund.giftlegacy.com.