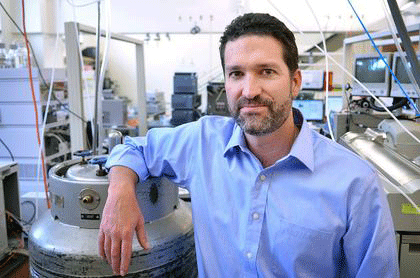 The University of Colorado Boulder has been awarded a cooperative agreement worth up to $14.6 million from the Defense Advanced Research Projects Agency (DARPA) to develop a new technological system to rapidly determine how drugs and biological or chemical agents exert their effects on human cells.

The project, called the Subcellular Pan-Omics for Advanced Rapid Threat Assessment, or SPARTA, will be conducted by an interdisciplinary CU-Boulder team led by Research Assistant Professor William Old of the chemistry and biochemistry department.

DARPA -- an arm of the U.S. Department of Defense -- wants to better understand the biochemical mechanisms at work during cellular exposures to biological or chemical agents to help prevent mortality during potential conflicts. But Old said the research effort also is expected to lead to new, broad-scale techniques to analyze cellular processes for wide societal benefit.

“Traditionally it takes decades to figure out how drugs affect an organism’s biology,” said Old. “Our goal is to rapidly speed up the process, identifying how these compounds work in weeks. This could lower the barriers to developing effective drugs that have minimal side effects.”

Old said the strategy is to comprehensively measure all major classes of biomolecules that respond to any cellular treatment or biological signal within milliseconds to days, which will help determine the key molecular events that mediate cellular responses. The team is developing new microfluidic devices to control and manipulate individual cell components in order to obtain subcellular resolution that will provide new insights into the functions of individual organelles and proteins within cells.

The devices will be integrated with high-end mass spectrometry instrumentation to enable molecular measurement of biological systems at an unprecedented scale.

One example illustrating the complexities of the project is the nerve gas, sarin, the function of which is already known, said Tristan McClure-Begley, a pharmacologist and analytical chemist on the project. Sarin causes a malfunction in a key cellular enzyme used to control muscles, resulting in their overstimulation.

“We know this drug causes negative effects in multiple signaling pathways, but what we lack is a comprehensive understanding of the mechanisms that lead to long-term systemic damage in individuals that survive exposure,” said McClure-Begley.

“We believe the technology developed under this program will go far beyond military and commercial applications,” said SPARTA Program Manager Emina Begovic. “We envision powerful applications of these new tools in a biomedical setting. Understanding how cells are affected by bacterial infection, for example, could lead to the development of new treatments.”

The BioFrontiers Institute already houses seven state-of-the-art mass spectrometers, located in the Proteomics and Mass Spectrometry Core Facility directed by Old. Mass spectrometers are powerful tools that can be used to identify the molecular components of a cell by measuring the mass of different molecules within a sample.

This instrumentation is critical for numerous research projects run by faculty at CU- Boulder and local companies. These projects include the search for biomarkers for Alzheimer’s disease and understanding mechanisms of cancer drug resistance in metastatic melanoma, said Old.

While BioFrontiers scientists and students and local biotechnology companies already use the CU facility for biochemical and biomedical research, the purchase of two additional next-generation mass spectrometers at a cost of $2.2 million as part of the DARPA cooperative agreement will greatly enhance and speed up such research activities. BioFrontiers already has pay-per-service agreements with a number of local biotech companies for use of its equipment, including the mass spectrometry facility and a next-generation gene-sequencing facility.

“We will be one of the few institutes in the world to have two of these next-generation state-of-the-art mass spectrometers,” said Old. “This creates a perfect opportunity for us to work more with local companies and increase our number of industrial partnerships. It is especially true for pharmaceutical companies who have a lead on a compound and want to know how it works.”

“There are two avenues of commercialization by CU-Boulder that may occur under the new DARPA cooperative agreement,” said Old. In addition to pay-per-service for industrial partners using BioFrontiers facilities, the CU-Boulder team will be developing new hardware, including the new microfluidic devices to automate a large part of sample preparation.

The team also includes Associate Professor Nichole Reisdorph of the University of Colorado School of Medicine and National Jewish Health in Denver.

BioFrontiers is a revolutionary research and teaching facility opened at CU-Boulder in 2012 to facilitate work on a wide swath of pressing societal challenges ranging from biomedical issues like cancer, heart disease and tissue engineering to the development of new biofuels. The BioFrontiers director is CU-Boulder Nobel laureate and Distinguished Professor Tom Cech, former president of the Howard Hughes Medical Institute and current HHMI Medical Investigator.

The facility offers opportunities for researchers and students from multiple disciplines to collaborate on advancing human health and welfare by exploring critical frontiers of biology to further teaching, research and technology at the intersections of the life sciences, physical sciences, math, computational sciences and engineering.

Send your thoughts and suggestions for the Newsletter.
END_OF_DOCUMENT_TOKEN_TO_BE_REPLACED