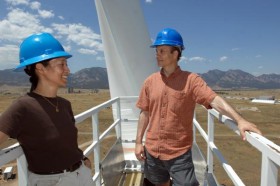 A new research institute promises to advance the University of Colorado at Boulder's position as one of the nation's leading green campuses, and further promote Colorado as a national hub for energy development.

The Renewable and Sustainable Energy Institute (RASEI), the next step in the evolution of CU-Boulder's Energy Initiative (EI), will be an interdisciplinary research-and-development effort between CU-Boulder and the National Renewable Energy Laboratory (NREL).

RASEI (pronounced "racy") will be the newest CU-Boulder research institute since the 1970s.

With the creation of RASEI, CU joins several other major private and public universities in advancing solutions aimed at producing energy economically from renewable sources, decreasing reliance on foreign oil, reducing greenhouse gas emissions, and using energy more efficiently. Among other missions, the institute will focus on interdisciplinary energy research, developing leading-edge energy technologies, training the next generation of energy professionals, and participating in a national dialogue on related regulatory and public policy issues. With this initiative, CU is fostering an invaluable working relationship with an important partner, and opening up opportunities for CU researchers to collaborate with Stanford, MIT, the University of California-Berkeley and other major research institutions focusing on the development of new-energy solutions, said CU-Boulder Interim Provost Stein Sture.

"We will address critical issues currently related to basic and applied research for renewable and sustainable energy," Sture said. "We will also look for effective ways to convert solar, wind, ocean currents-you name it-into electricity and biofuels of some kind."

Sture, CU-Boulder Chancellor Phil DiStefano and chemistry and biochemistry Professor Carl Koval, the director of EI and now RASEI, have been the lead architects of the project. Koval and Sture presented their case for the creation of the institute at the Board of Regents' June 22 meeting at UCCS. The regents approved a resolution by DiStefano, giving the campus the green light to establish RASEI, which is expected to make its formal launch in late summer or early fall of this year.

According to Sture, RASEI will operate as a CU-Boulder research institute, and expand and build upon the work already started by the Colorado Center for Biorefining and Biofuels (C2B2), the Center for Research and Education in Wind (CREW), and other research centers affiliated with the Colorado Renewable Energy Collaboratory. The collaboratory's partners include CU-Boulder, Colorado State University, the Colorado School of Mines and NREL. 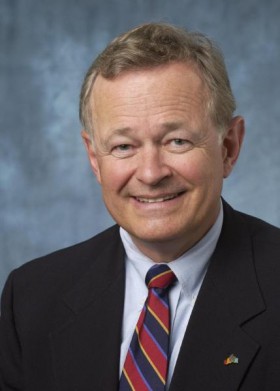 Koval, who has led EI for the past three years, will oversee RASEI's development until the institute launches a national search for a permanent director next year. All of the programs EI has developed over the past three years will become part of RASEI, including undergraduate and graduate energy certificate programs, a yearly research symposium, seed and proof-of-concept grant funding, business outreach, public speakers and panel discussions, he said.

"As is the case with other CU-Boulder institutes, RASEI will provide a platform for students and faculty to pursue multidisciplinary energy research projects, and to work closely with scientists at a federal laboratory," Koval said.

RASEI will operate much like CU-Boulder's nine other independent research institutes, including the Joint Institute for Laboratory Astrophysics (JILA), which collaborates with the National Institute of Standards and Technology (NIST), and the Cooperative Institute for Research in Environmental Sciences (CIRES), which collaborates with the National Oceanic and Atmospheric Administration (NOAA). 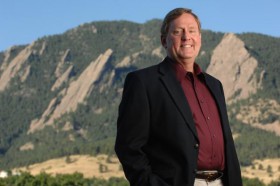 Carl Koval is a professor at CU-Boulder and the interim faculty director of CU's Renewable and Sustainable Energy Initiative. [Photo by: Glenn J. Asakawa

Sture said the institutes play a critical role in educating graduate and postdoctoral students, and attract a substantial portion of the federal research funding garnered by the CU-Boulder campus. University leadership expects all of the research institutes to play a key role in achieving the goals established in the Flagship 2030 Strategic Plan, he said.

CU-Boulder boasts approximately 150 faculty members who are involved in energy-related research, including work in the development of smart grids and smart cities, nanotechnology materials, algae-derived biofuels for vehicles, wind energy, and solar energy conversion such as photovoltaic technology, which converts the sun's rays into electricity.

RASEI will also put a strong focus on student education, and develop partnerships with other large research universities, federal labs, and private-sector companies that can speed new technologies to the marketplace, Sture said.

Some 70 CU-Boulder students are involved in sustainable energy development, but the campus expects that number to rise to 500 over the next four or five years as RASEI researchers gain traction at the national level. Because of CU-Boulder's reputation as a "green university," it already draws students from across the country, Europe and Asia, Sture said.

To strengthen such public-private partnerships, the institute is working closely with the CU-Boulder Leeds School of Business, the CU School of Law, the College of Engineering and Applied Science, the College of Arts & Sciences, and the CU Technology Transfer Office.

ConocoPhillips is building a new research campus near Boulder, and Sture is hopeful that the new institute will spur greater investment overall in new-energy development in Colorado, seen as a national hub for green technology creation.

UC-Berkeley received a $200 million contribution from British Petroleum and Exxon donated $200 million to Stanford, and CU hopes to become one of ConocoPhillips' main partners over the next several years in terms of energy research and development, Sture said.

The oil company launched a one-year, national search for a site for a campus devoted to energy research and development before settling on the Louisville area because, in part, of its proximity to CU-Boulder. ConocoPhillips is expected to start occupying the 432-acre Louisville Global Technology and Corporate Learning Center in 2012, according to the company's Web site.

"Universities do research that is tightly connected to education, and that's the important part of this. It's the key to getting students trained in this area," Sture said.

The Golden, Colo.-based NREL collaborates with some 80 U.S. universities, but CU will benefit from its geographical proximity to the nation's leading federal research laboratory dedicated to renewable energy development.

"We are fortunate we have NREL in our own backyard," Sture said.