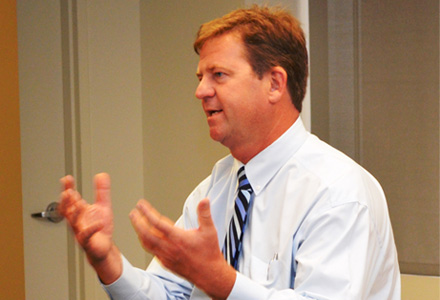 Ken Lund, director of the Colorado Office of Economic Development and International Trade, speaks to CU leaders at the system administration offices on Wednesday. Photo by Cathy Beuten

The University of Colorado and other institutions of higher education will play a key role in selling the state of Colorado’s brand to global business leaders, says the executive director of the Colorado Office of Economic Development and International Trade.

Ken Lund spoke Wednesday at the CU system administration offices in Denver, offering a brief summary of the new Colorado Blueprint, an economic development plan initiated by Gov. John Hickenlooper. Presented by the Office of Government Relations and the new CU Advocates program, which launches this month, the event was attended by dozens, including President Bruce D. Benson, CU’s executive team and campus leaders.

“Part of what we’re hoping to achieve is elevating institutions like this one to be part of the brand that sells this state,” Lund said. “We’re trying to weave together all the assets we have here, because it has got to be about more than just lifestyle.”

Lund said Colorado’s well-known natural beauty and outdoor recreation offerings obviously help with tourism and inspire people to move here. But more image-building must be done to tell the business world that the state is hospitable to boosting bottom lines.

The state’s highly educated work force can be better leveraged in building a stronger, more robust economy, he said, as can the growth in research throughout the CU system.

“I look at what’s going on at the Anschutz Medical Campus, and the question is, ‘How do we leverage that even more?’ Call me greedy.”

Lund said there are no “magic bullets” for growing jobs in the state, but that growth is best achieved by focusing on the industries already engaged in business here.

While acknowledging that state funding for higher education is insufficient, Lund said he doesn’t expect a tax measure would be passed by voters this year or next. “We need to re-establish the credibility of government,” he said.

Send your thoughts and suggestions for the Newsletter.
END_OF_DOCUMENT_TOKEN_TO_BE_REPLACED