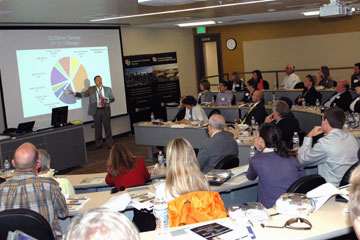 Jeff Parker, vice chancellor of administration and finance, CU Denver | Anschutz Medical Campus, explains some of the funding challenges confronting CU at the May 29 lunch-and-learn session.

CU Advocates wrapped up a four-campus series of discussions about the university's economic future with a lunch-and-learn session at the University of Colorado Denver Business School.

State funding for higher education remains on a significant downward trend and is predicted to worsen in the next decade, officials said. In response, the university is implementing various strategies to lessen the impacts of state funding cuts, including reducing expenditures through budget cuts and efficiency initiatives, increasing tuition, and increasing foundation and fundraising efforts. In addition, the university is working to inform the public and legislators about the funding crisis and CU's substantial value to the state and nation.

A similar lunch-and-learn took place on the CU Anschutz Medical Campus in April. This week's session filled a lecture room in the Business School. View the slideshow of their full presentation here (PDF).

Parker and Saliman opened the budget conversation by focusing on a few positive highlights, including CU's economic impact ($5.3 billion to Colorado's economy in 2011) and outstanding academic achievements (five Nobel Laureates and eight MacArthur Genius Fellows). CU Denver confers the most graduate degrees (master’s level) of any institution in the state and boasts the most diverse student population among public research universities in Colorado. It offers the state's only schools of architecture and public affairs, the only bioengineering program (joint with the Anschutz Medical Campus), the largest graduate business school and school of education, and was among the first international colleges approved by the Chinese Ministry of Education.

The funding picture has grown increasingly bleak during the past decade. In 1991, almost 20 percent of the state budget went to higher education. By 2001 the state share had dropped to 14 percent for higher education and now it's at about 8 percent. Projections show that state higher-ed funding could run out by 2023.

The bulk of general fund obligations goes to K-12 and Medicaid -- and those portions will steadily increase in the coming years, the finance charts show. Higher education bears the brunt of cuts "because higher education is the most flexible part of the state budget, and it's the easiest part for them to cut," Saliman said.

He said the funding challenges will become especially acute around fiscal years 2016 and 2017 when the state is projected to dip into the red because "there isn't enough money coming in the door" to cover all the state obligations. The shortfall is projected to hit $1 billion by 2023.

CU has coped with the reductions by becoming even more efficient -- the university's administrative expenses rate well below peer institutions -- and increasing the share of each campus's budget made up by tuition and fees. But the current approaches to balancing the budget are not sustainable, Parker and Saliman said.

"It's becoming a choice for the people of Colorado: What do you want your institution to look like from a quality standpoint vs. how much do you want it to cost?" Saliman said. "That's why this is so important, because the people of Colorado need to know this is going on and that different choices need to be made if we want to keep CU affordable in the future while maintaining current quality, and if we want it to be accessible to Coloradans in the future."

Parker said if current funding trends continue, a tipping point will be reached. Cuts have thus far occurred mostly in the administrative areas in order to preserve academic quality. "The quality of education at this institution -- at all four campuses -- is still there, but at some point, if we keep cutting, that will be brought into question," he said.

In response to a question about innovation in education, Parker pointed out that CU Denver is entrepreneurial and continually assessing what programs are desired to fill workplace needs. He pointed to innovative Business School programs including Global Energy Management and Risk Management. "I would say the Denver campus is notorious for doing that -- we have one-of-a-kind programs." He added that the university is engaging with faculty and leadership to ensure that CU remains a leader in technology. "Technology is obviously going to be key to how we deliver higher education in the future," Parker said.

Saliman noted that the recent Colorado Supreme Court reversal of the Lobato school finance lawsuit provided a dose of good financial news. It was feared that the suit, which argued that the state's current school funding system is unconstitutional, would have required the state to kick as much as $4 billion more a year into K-12.

Saliman said supporters of a new funding method for K-12, which passed the Legislature this year, are assessing a taxing mechanism to put on the ballot this fall.

"When you have more flexibility someplace else, that might reduce the amount of pressure that we see on higher education," Saliman said. "That being said, does that conversation going on about the November ballot provide direct support to higher ed? It doesn't."

The CU Advocates program is a way to arm faculty, staff, students and alumni with information on how to be better advocates for the university. To sign up for CU Advocates click here.

Send your thoughts and suggestions for the Newsletter.
END_OF_DOCUMENT_TOKEN_TO_BE_REPLACED