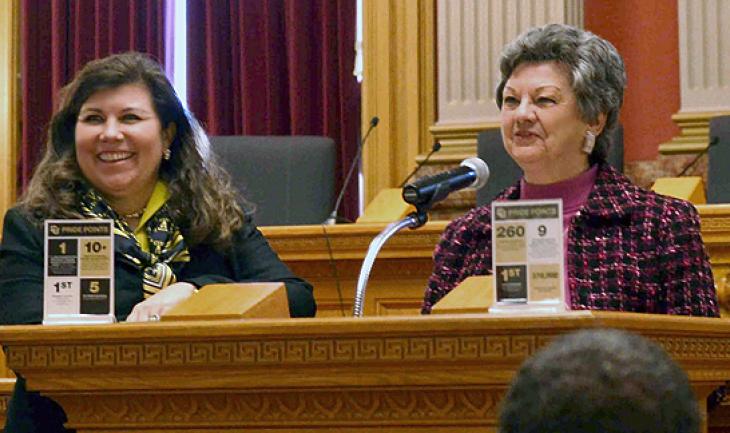 The sound of the CU fight song reverberating across the walls of the House of Representatives isn’t an everyday experience at Colorado’s Capitol. It’s just one element that makes CU Advocates Day a special gathering of CU Advocates, students and state lawmakers under the gold dome.

More than 110 CU Advocates and guests met there early Friday for the annual event, which provided an opportunity for the CU Advocates to hear from and network with legislators. 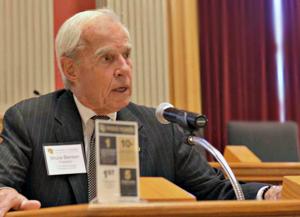 Photo: Cathy Beuten/University of Colorado
President Bruce Benson thanks attendees for being part of the CU Advocates program, which now counts 2,800 members.

CU President Bruce Benson and Vice Presidents Tanya Kelly-Bowry, government relations, and Todd Saliman, budget and finance, spoke to attendees about the outlook for state funding and the role of Advocates in promoting the value of higher education in the state.

Both political parties were represented. In remarks, leaders described not only the good news for CU and higher education in the coming years, but the more threatening outlook as well.

“This is a really good year for higher education at the state Capitol,” Saliman said, emphasizing the encouragement in the current state budget under review by the Legislature. Although the Joint Budget Committee this week reduced a previously proposed increase for higher education, institutions in the state still stand to benefit from a $66.6 million boost to operating budgets, an increase of 11 percent for the 2015-16 fiscal year.

The future beyond that budget year is cloudier. Looming TABOR refunds, a reflection of an improving state economy, could potentially threaten higher education funding as soon as next year.

“The Legislature is struggling in figuring out how to make those refunds happen and still meet the needs of the state,” Saliman said.

Anderson, a Republican, went so far as to say that TABOR might lead to zero public funding for higher education in the coming decades.

“I have very bad news for you,” she said. “In 15 to 20 years, the state will probably be broke unless something changes. … TABOR was called a growth limit, but it’s really a spending limit – even the courts have called it that.”

Feeley, an attorney who now represents plaintiffs in a long-underway lawsuit challenging the constitutionality of TABOR, gave a brief update on the status of the case. Though filed four years ago, it awaits a Supreme Court decision on whether it may proceed, likely in June. Anderson said the case could potentially be in the courts another six to eight years.

“The case is about the right of the legislative body to set the budget through taxes,” she said. “It’s impossible to budget with TABOR in the Constitution.” 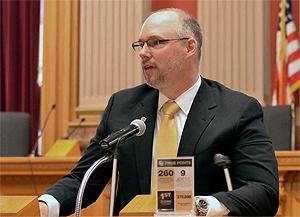 The sound of the CU fight song reverberating across the walls of the House of Representatives isn’t an everyday experience at Colorado’s Capitol. It’s just one element that makes CU Advocates Day a special gathering of CU Advocates, students and state lawmakers under the gold dome.

Priola, a Republican, offered a different perspective, saying “TABOR allows for the voters to give that nod for whatever purpose going forward.” The CU-Boulder business school graduate – and former Ralphie handler – also took the opportunity to advise CU Advocates.

“CU is a prime economic driver not only in Colorado, but in the region,” he said. “Keep that in mind when you’re talking to folks about the University of Colorado and what it means to our state.”

Schwartz – a CU alumna as well as regent emerita – also offered tips for CU Advocates, specifically how to talk to legislators about supporting CU and higher education.

“Call your representatives and tell them what your position is,” she said. “Our CU Advocates should give (lawmakers) talking points in a minute or so. It’s important to be succinct. … And personalize it – tell them your story about your connection to higher education.”

Shortly after the main program ended, with CU Advocates filling the gallery, Priola led the House of Representatives in singing the CU fight song.

Court, also referring to the challenges posed by TABOR, offered an alternative during the earlier program: “This is the CU fight song for the future: Fight for our fiscal sanity.”

Tagged with:
Board of Regents, CU Advocates, Legislature