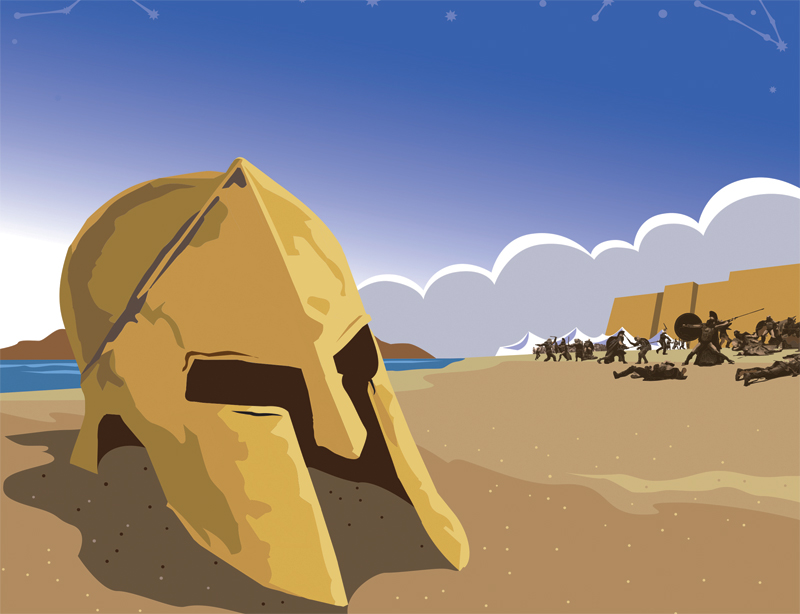 The Colorado Shakespeare Festival’s season of myths, legends and fairy tales under the stars continues with the rarely staged Troilus and Cressida, a thrilling and timeless Trojan War epic penned by the Bard in 1602. The play opens June 24 on the Mary Rippon Outdoor Theatre at CU-Boulder and runs through Aug. 6.

Troilus and Cressida weaves together stories of god-like heroes, embattled kings and the tragedy of two doomed, disillusioned lovers who seem like grown-up versions of Romeo and Juliet.

Director Carolyn Howarth says the play’s mythic mélange of drama, comedy and history was what ultimately inspired her to pursue a career in theater. She first saw a performance of the play at London’s Royal Shakespeare Company in 1985, where a young Alan Rickman played the role of Achilles.

“I loved how cynical and satirical the play was,” Howarth says. “I was 19 and coming out of the politics of the 1980s, so I really appreciated the edgy, biting humor. Shakespeare didn’t softball anything. It was a really visceral, immediate, exciting experience for me.”

The rest, as we now know, is history: Howarth earned her MFA from the University of California Davis, then appeared in and directed scores of plays all over the West, including a handful of productions at the Colorado Shakespeare Festival.

This summer will be Howarth’s sixth with CSF, and this time around she’s more excited than ever to roll up her sleeves. Her production of Troilus and Cressida brings the 400-year-old play into the 21st century by setting all the action in a world on the verge of apocalypse and placing women in a few roles usually reserved for men.

“It has troubled me for decades that women are such a rarity in Shakespeare festivals simply because the plays aren’t written with that many female characters,” Howarth says. “If these plays were written today, they likely wouldn’t be cast with just men.”

In Howarth’s production, the traditionally male roles of Ulysses, Agamemnon and Aeneas will be female characters. She hopes that putting women in positions of militaristic power proves that men aren’t the only ones who can pull off hubris and biting humor.

“This is a big, macho, violent, scary, sexy play, and I think it can still be all of those things when it’s coming through a female lens,” Howarth says.

“Carolyn is a master at telling these huge, heroic stories,” Orr says. “I can’t wait to see her Troilus and Cressida.”

Given the change in command, Howarth says cutting the play’s many lines about the weakness of women was a no-brainer. But by and large, she says, the most powerful gender statements unfold without any script edits at all.

“When you don’t even touch the script, you’re forced to see how the men of the play deal with women in power,” Howarth says. “They can’t just run roughshod over the women anymore; they have to be dealt with, interacted with, as equals. So that creates tension, and a whole other set of obstacles comes up.”

This will be Howarth’s first time directing Troilus and Cressida, but it isn’t her first go-round with a large-scale historical play. She says her proudest moment at CSF thus far has been directing last summer’s Henry V.

“I pushed myself out of my comfort zone in that production,” Howarth says. “Taking on such a huge project with that amazing cast was just an exquisite experience.”

Almost as exquisite as watching Alan Rickman on the London stage.

Troilus and Cressida runs June 24 to Aug. 6 at the Mary Rippon Outdoor Theatre on the CU-Boulder campus. Tickets start at $20. To buy season or single tickets, go to coloradoshakes.org, call (303) 492-8008 or visit the CU Presents Box Office at 972 Broadway in Boulder.

The Colorado Shakespeare Festival offers several pre- and post-show activities, including tours of the Colorado Shakespeare Gardens, Bard-themed performances on the green and talkback discussions with actors and directors. CSF also offers wine, beer and boxed dinners in the gardens and concessions at both the Mary Rippon and University Theatres.