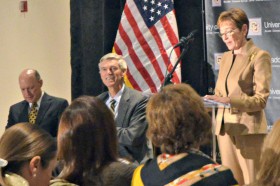 Creating Futures has generated more private support for CU than any other campaign in the university’s 137-year history.

“Donors have made CU a better place for students, faculty, alumni and friends,” said Bruce Benson (’64), who with his wife, Marcy, served as chair of the campaign. “Today, we celebrate the success of the Creating Futures campaign and say ‘thank you’ to all the donors who have fueled that success.”

CU has benefited from transformative support during the campaign from donors including:

Also during the Creating Futures campaign period, more than $240 million was given toward endowments that support CU with perpetual funding streams for generations to come. As of Sept. 30, CU held $937.4 million in endowments — a 57 percent increase since the start of the campaign.

“Throughout Creating Futures, it has been an honor to work with my volunteer peers who have worked to serve this great university and inspire donor support,” said Carl (“Spike”) Eklund (’71), chair of the board of directors. “The University of Colorado is an integral contributor to the health and welfare of citizens throughout and beyond this state. Today, we celebrate its fundamental role as a core Colorado institution.”

In addition to the campaign leadership of Marcy and Bruce Benson, CU’s four campuses each benefited from outstanding volunteer campaign leadership on each campus, including Jean (’64) and Jack (’64, ’70) Thompson at CU-Boulder, Nancy “Nan” (’87) and Carl “Spike” Eklund (’71) on the Anschutz Medical Campus, Laura (’94) and Dave (’82) Baker on the Denver campus, and Mary and Ed Osborne on the UCCS campus. Additionally, many volunteers served on campus campaign committees.

Gifts came from all 50 states and 79 countries.

The strong private support seen during Creating Futures, though it coincided with the worst economic downturn in 75 years, represents a formidable vote of confidence by alumni, friends, corporations and foundations toward the University of Colorado.

But with continuing threats to state funding for the university and escalating needs in areas ranging from financial aid to physical infrastructure, increased fundraising will be a critical and continuing imperative for CU. To this end, the university recently revamped its advancement operations to more directly align its fundraising structure with the university.

“As long as society has burning questions that remain to be answered, new frontiers that remain to be explored, we must continue to push hard for greater capacity in everything we do,” said CU’s Vice President of Advancement Kelly Cronin, who came to the university in September. “Today we celebrate the passions of our donors and the efforts of our faculty and staff, and look ahead to a future in which generous donors continue to better equip CU to educate, innovate, and foster positive change.”