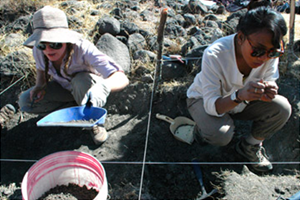 CU Denver anthropology students Tracey Lancaster, left, and Elicia Abella dig in the research trench at the Laetoli fossil site. They are looking for more hominid footprints that date back 3.6 million years.)

NORTHERN TANZANIA – Early light spills across the vast grassland that, for centuries, has been walked only by animals and nomadic Masai tribes. The only sound and movement comes courtesy of modern man. Several trucks boil dust as they rumble over the savannah.

A string of mysterious footprints in a geologic layer has drawn nine University of Colorado Denver and two Texas A&M anthropology students to this land. On a crisp and clear July morning – winter on this side of the equator – they pull up to Laetoli, one of the world's most important fossil sites.

The students lather on sunscreen, lace up boots and prepare for another day of work. While most northern Tanzania visitors come for the region's teeming wildlife, these researchers from CU Denver – a mix of graduate and undergraduate students – are here to uncover ancient treasure. They hope to discover what the fossils can tell us about the story of mankind.

“It's like a Catholic going to the Vatican,” said CU Denver student Kevin Darcy as he walks up to a mound of basalt that protects the telltale Laetoli footprints. "It's like Mecca," adds fellow graduate student Corina Marin. "We've spent over a decade reading about this site and the new evidence they're always finding in the region. It's like, 'Man, we're finally here. I can't believe we're here.'"

The anthropology students and one film student, all first-timers to Tanzania, are midway through a six-week field school deep in the African outback. They've already spent two weeks digging into the renowned Olduvai Gorge fossil site, explored regional cities and viewed wildlife galore. Still to come is a trench-digging project at Laetoli – an effort to uncover more of the hominid footprints that date 3.6 million years – and eye-opening visits to Masai villages to witness rite-of-passage and wedding ceremonies.

Each June and July, the Tanzania Field School offers an unparalleled educational experience – a blend of hands-on practical field work and cultural excursions – just as anthropology associate professor Charles Musiba, Ph.D., envisioned when he launched the school in 2006. An expert in the study of human origins, Musiba, a Tanzania native, wanted students to perform firsthand research in places they'd only read about in textbooks.

These sites, Olduvai Gorge and Laetoli, are considered the cradle of humanity, where the earliest hominids left traces of man's first forays upon two legs.

"It's just absolutely amazing to be part of this team and working these sites," Marin said. "We're all following in the footsteps of the Leakeys. So for me, it's absolutely a dream come true."

'Footprints of our ancestors'

In 1976, two members of anthropologist Mary Leakey's team were tossing dried elephant dung at each other when one of the men discovered rain drop marks and animal tracks in the rock. Two years later, Paul Abell, another member of Leakey's team, discovered the trail of about 70 fossilized hominid footprints that made Laetoli famous. The footprints, which reveal the walkers had arches, unlike an ape's flat feet, are the earliest evidence of hominids walking upright.

"Here you see the place of the footprints of all of our ancestors, every single one of us, it's our ancestry. That's really left an impression on me," said Thornton Giese, another CU Denver anthropology student. "We can read about it in books or hear lectures, but actually coming out and seeing the real thing – well, hopefully we'll see more footprints – that's something I will carry with me for the rest of my life."

The students carry shovels, pick-axes and trowels to dig out a 15-yard-by-30-yard trench to uncover fossilized treasures more than a foot underground. They spend more than eight hours a day for two weeks methodically digging down to Volcanic Tuft No. 7, which blanketed the area after a series of volcanic eruptions 3.6 million years ago. T-7's fine ash layer became like wet cement after light rains fell, capturing prints of animals and early hominids.

As student Brian Miller digs into the ground, Musiba instructs, "Careful when you're using the shovel. You don't want to scrape the surface (of the T-7 layer) too much."

While the work is tedious, the students are intrigued by the geologic layerings, a fault line that runs through the trench, and various bone fragments being unearthed. Part of a tooth from a large animal, possibly an elephant, is among the discoveries. In a segment of T-7, Musiba uncovers what appears to be fossilized buffalo tracks. The team finds other fossilized animal tracks during two weeks at the Laetoli trench.

Tracey Lancaster, a first-year graduate student in the CU Denver Department of Anthropology, said every specimen and every track uncovered is valuable. "These are important because they will tell us what animals walked through here. They will tell us about the environment they lived in."

A few days earlier, an entourage of officials from the Tanzania Parliament and Ministry of Tourism and Natural Resources met with Musiba and the students at Laetoli, inquiring about their research and plans for a $35 million on-site museum. The facility will showcase the 75 footprints already found – believed to be left by four hominids, including a child – and any others that the students unearth.

"This is the beginning of a very huge project, and the students should be proud of that," Musiba said. "It's a project in which they are exploring for more footprints and will help guide the effort toward erecting a museum on the site."

A smaller museum already exists on a hill overlooking the footprint site. The structure was built in 2008 and includes a replica casting of the famous footprints as well as exhibits prepared by Musiba and colleagues, including field school co-founder Professor Cassian Magori of St. Francis University College of Health and Allied Sciences.

Darcy, meanwhile, is working on a cultural anthropology management project related to plans for the new museum, which may be built in the shape of a giant footprint. He spent much of the field school visiting Masai villages, called bomas, to gather residents' concerns and hopes in regard to an influx of visitors to their native land.

"I'm studying how to balance the tourism that will come with a new museum with the heritage of the people and the preservation of the Laetoli research site," Darcy said.

Musiba said government officials are excited about the prospect of a new museum at Laetoli, which is a World Heritage Site.

"They are interested in how we are integrating local communities as we develop and build the site," he said. "It has changed officials' way of thinking about how communities surrounding the World Heritage sites can benefit from tourism, for instance." 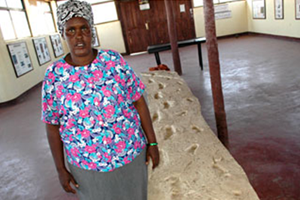 Margaret Kaisoe, a local Masai, stands next to a cast replica of hominid footprints at the current Laetoli fossil site museum in northern Tanzania. A new museum is planned to be built around the actual footprints down the hill from the current museum.

Margaret Kaisoe, a local Masai, lives in a small house near the current museum. She was born here and cherishes the customs and culture of her people. But she also recognizes that the world is changing and that if her land offers an educational resource to visitors, so be it.

"The fossils are important because they tell us about an event and how people once lived here," she said. "We want to help people learn more."

Margaret notes that a global attraction such as a new museum could benefit the Masai by offering water pipelines, improved roads and employment opportunities.

The CU Denver students, including those from previous field school sessions, pictured in displays inside the current museum, will play a significant role to the heritage site. The new facility will include classrooms, a research center and displays about the cradle of humankind. At the center will be the actual footprints.

"It's something for the entire world," Giese said of the museum project. "This is something that really brings all of humanity together because this is where humans started evolving into what we are."

As the sun arcs over the savannah to mark another day, the students dig, scoop and brush through hard layers of earth. They painstakingly log data that will add to the research record of this international jewel. They also register emotional impressions of this hallmark of humankind – with its stunning scenery and warm-hearted people – that won't easily be forgotten. 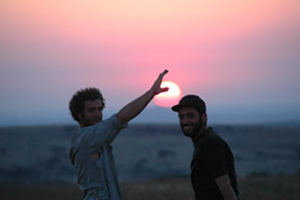 CU Denver anthropology students Thornton Giese, left, and Khashayar Asgari enjoy watching a sunset over the Serengeti Plain near the Laetoli base camp.

"I will really miss the open hospitality and friendship that exists within every person that you run into in this country," CU Denver student Vincent Burchard-Smith said. "This has been far more of an educational experience than any of the time I've spent in a classroom."

Elicia Abella, a graduate student in biological anthropology, called working at the famed fossil sites an "unreal" and "invigorating" experience. "There is just this spirit that we're all in this together," she said. "We're trying to find specimens and collect as much as we can. It's just amazing to me because we all share that same geeky passion. It's an influx here of just really brilliant people."

Musiba said the field school is a transformative experience that makes students better global citizens. "Their global perspective completely changes, and that's what anthropologists do," he said. "We see our world through a very different prism."

But what if no more footprints are found during this year's field school? There's a saying in Africa – "It's not a problem" – and CU Denver student Thornton Giese couldn't agree more.

"If we don't find footprints, that raises questions about how these footprints were weathered and eroded away over time and how we can protect that from happening," he said. "We're still learning a lot."