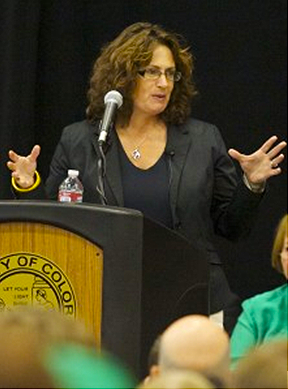 Andrea Herrera, professor, Women’s and Ethnic Studies, deviated from the traditional script for convocation speeches when she opened the academic year Aug. 15.

In lieu of advice to carefully select a career or making the most of opportunities, Herrera talked about what she deemed as an urgent need for kindness, gratitude and beauty.

Quoting from this year’s all campus reads selection, “The Immortal Life of Henrietta Lacks,” Herrera told the story of Lacks and the legacy of the HeLa cell line, cells taken from Lacks as she was dying from cancer. While the story raises many questions about medical and personal ethics as well as racism, sexism and inequality, Herrera focused her remarks elsewhere.

Herrera focused on Lacks’ legacy, virtual immortality as her cells led to scientific discoveries that led to improved treatment for ailments ranging from depression to high blood pressure. 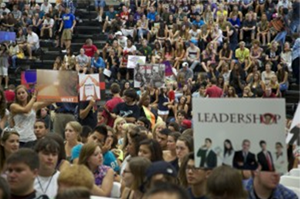 “The thought that Henrietta has indeed, though inadvertently, helped human kind in in immensely significant and unexpected way seems to be source of comfort for her family and friends,” Herrera said.

“Though I am acutely conscious of the affront to Henrietta, and to her family, this theme of helping others altruistically or selflessly without benefit and sometime at one’s own expense is for me the greatest Lesson that Henrietta Lacks is teaching us.”

Herrera’s remarks served as the official opening of the academic year. She was joined by members of a record-breaking freshman class, as well as a member of the CU Board of Regents, top campus administrators and faculty and staff in at-capacity Gallogly Events Center. Many students sat with their Freshman Seminar sections marked with brightly colored signs. After the speeches, students and families were treated to dinner on the University Center Upper Plaza. 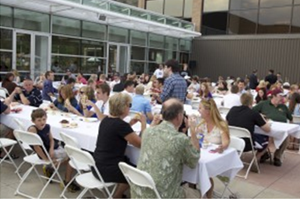 Students and families enjoy to dinner on the University Center Upper Plaza.

In his remarks, CU Board of Regent Kyle Hybl described UCCS as “a place that wants you to succeed” while Steve Collier, president, Student Government Association, used a camping metaphor in his comments directed at the freshmen.

“Leave UCCS better than you found it.”

Video available
To see the full Convocation event, visit http://www.uccs.edu/provost/convocation.html. The event was recorded by the Media Services Department.

Library display
In connection with “The Immortal Life of Henrietta Jacks,” the Kraemer Family Library has a display containing written information about Lacks and the legacy of the HeLa cell line from magazines and peer-reviewed journals dating to the 1970s. The display is on the third floor of the library. To see photos, visit http://www.flickr.com/photos/27640054@N08/sets/72157631182978838/

Tagged with:
Board of Regents, Hybl