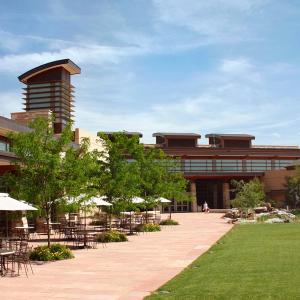 When the lights went on in the new interlocking CU signs on the outside of CU South Denver, officially branding the facility in one of the fastest-growing areas of Colorado, lights also went on in the heads of business and government leaders in the area.

Some of those leaders joined a panel discussion to talk about the opportunities and challenges for CU South Denver at last week’s Board of Regents retreat at the facility. The $40 million gift of the former Wildlife Experience museum and event space, made by real estate entrepreneurs Dave and Gail Liniger in 2014, was the largest facility or real estate gift in university history. Since the donation, CU has been renovating the facility, offering programming from the four campuses and connecting with the community.

“Your university fills the biggest hole that was left here in south Denver. We’re working diligently to make sure you are plugged in. I think the future is bright,” said panelist Mike Fitzgerald, president and CEO of the Denver South Economic Development partnership. “We need to make sure you’re successful. What is the role that benefits both you and the community? There’s no finish line in this race.”

Fitzgerald was joined on the panel by Robert Golden, president and CEO of the South Metro Denver Chamber of Commerce; Lone Tree Mayor Jackie Millet; and Luella Chavez D’Angelo,  vice chancellor for enterprise development for CU South Denver. It was moderated by Dorothy Horrell, chancellor at CU Denver, which operates the facility on behalf of CU.

The south Denver footprint is home to headquarters for seven of the 10 Fortune 500 companies in Colorado. Additionally, some 20,000 companies that employ more than 200,000 people call the region home. Many of the businesses in the area align with CU focuses such as business, health care, financial services and cybersecurity, said Chavez D’Angelo.

“This location represents the biggest opportunity we have to build collaborations for CU’s 29 schools and colleges,” she said. “Talk about a real-life living, learning lab. We have to be known as the player who is helping to solve real world problems.”

Lone Tree Mayor Millet pointed to opportunities emerging from her city’s designation as one of 15 cities nationally in Transportation for America’s “Smart Cities” initiative, which aims to use technology to improve transportation and mobility.

“We want the best and brightest in development, light rail, health care,” she said. “What I’m looking for is your students and your professors to help us design the city of the future.”

Golden said CU had a strong foundation in the area even before the South Denver facility became a reality with engagement on several fronts with the South Metro Denver Chamber. Michele McKinney, who leads the CU Advocates program, is vice chair of the SMDC board of directors and chair of its legislative action committee.

The relationship will serve CU’s efforts well, he said.

“Keep doing what you’re doing, and that’s staying engaged with the business community,” Golden said. “You’ll hear what the needs are.”

Fitzgerald said the key asset CU has to bring to bear in the area is its people.

“We need people who will help imagine the future with their brainpower and collaboration, and your university can help with that,” he said.

Send your thoughts and suggestions for the Newsletter.
END_OF_DOCUMENT_TOKEN_TO_BE_REPLACED