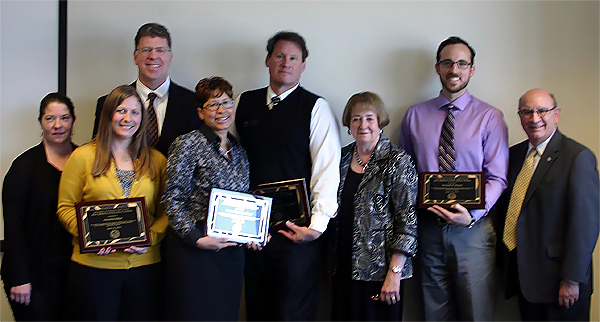 One person each from CU-Boulder, UCCS and CU Denver l Anschutz Medical Campus, as well as system administration, received the honor during an April 18 luncheon ceremony.

Steve Linhart, the dean of students at UCCS, who one nominator described as having an “impeccable worth ethic” and “selfless approach to serving others.” Linhart has been employed at the university since 2000, serving in numerous roles: police officer, instructor, executive director of Judicial Affairs and Student Support, and student conduct officer and director of emergency management. He became Dean of Students in 2012.

“Steve can be found on campus pushing stuck cars during a snowstorm, at the store to buy groceries for students who are in financial hardship, in front of a student’s apartment to help them move, on the phone with a parent to coordinate care and support for their student,” said nominator Benek Altayli, director of the University Counseling Center. “There are few people who are as deserving of this small token of appreciation from the organization he has served with such selfless dedication.”

Linhart is a regular volunteer with the Rocky Mountain Field Institute, where he contributes to the efforts of conservation and stewardship of public lands in southern Colorado. He also organizes events, practices and races for the Manitou Springs High School Girls’ Swimming Program.

He serves on 12 UCCS committees, including the student response team, which helps design and deliver appropriate responses for youth who have been identified as students of concern; the Emergency Preparedness and Action Committee to help prepare the campus community for possible emergencies; and THINK, for the prevention of alcohol abuse and related issues on campus.

Kenneth Nelson is a police administrative supervisor at CU-Boulder. He serves as a communications dispatcher, including serving as a 911 operator who takes initial emergency calls from the public, and also oversees hiring processes, payroll and personnel issues. Nelson has worked at the university for four years and also is a student; he’ll graduate with a master’s degree in business administration.

In addition to his duties with the university, “Kenny … is an equal-opportunity volunteer,” said Police Chief Melissa Zak.

He regularly donates blood to the Bonfils Blood Center, and it’s estimated that those contributions have touched the lives of at least 75 people in the state. He also donates his time to the city of Thornton’s Snowbusters program, which pairs volunteers with seniors and disabled residents who have difficulty removing snow from their sidewalks after winter storms. During the 2013 flood, Nelson and his wife volunteered on weekends to help Longmont residents with clean-up efforts. He also volunteers with the Exempla Good Samaritan Medical Center, and volunteered more than 304 hours in 2013.

“When we talk about giving back to our community, Kenny does just that – he gives back, without expected compensation or quid pro quo,” Zak said. “He gives without complaining and understands the hardships and plight of others. He exemplifies a sustained commitment to the Front Range community, which includes the Boulder campus.”

In January 2014, he received both the Bronze and Silver Presidential Volunteer Service Awards.

He is a member of the Employee Wellness Committee and is designing the written protocols as well as identifying the various genres associated with employee wellness. He also personally assists employees during times of crisis.

Gillen is a mentor for Colorado Youth at Risk, a program that stresses the importance of feeling connected to your community. She acts as a role model and has found ways to encourage teens to stay in school and graduate. She also is an animal activist and fundraiser for the Denver Dumb Friends League, and advocates through education against animal neglect and abuse.

“Christine is able to add her own personal touch to events that bring her fellow employees joy,” said nominator Ashlee Powers, human resources manager. “She enjoys witnessing fellow community members achieve milestones in their careers at recognition events; supports local, small businesses and fellow employees at the craft fairs and jewelry shows; and enjoys bringing a little joy to the campus by getting the word out about social opportunities on campus.”

She is a board member of Strive Preparatory Schools, a Denver-based network of free public charter schools, and is an active member of the Strive Family Council, which supports teachers and develops activities for students. In addition, she serves as a member of the Denver Public School Superintendent Forum;  Jack and Jill of America, an African-American family organization that sponsors cultural, social, education and recreational activities; Alpha Kappa Alpha Sorority; P.E.A.K. Partnership for Montclair School of Academics and Enrichment; and the New Hope Baptist Church Usher Board.

“I am always impressed by her enthusiasm and believe she demonstrates the work ethic and character of a person dedicated to service,” said Terry Lee, Assistant Vice President and Chief Risk Officer, who nominated Shepperson-Turner for the award.

During the retreat, council members also engaged in a communications training session with Mark Augustine, former director of employee development at CU-Boulder.

Council members discussed ways to make meetings more efficient and effective, including engaging more with constituents and other councils at the university; overcoming frustrations that occur before, during and after meetings; and strategize for the future.