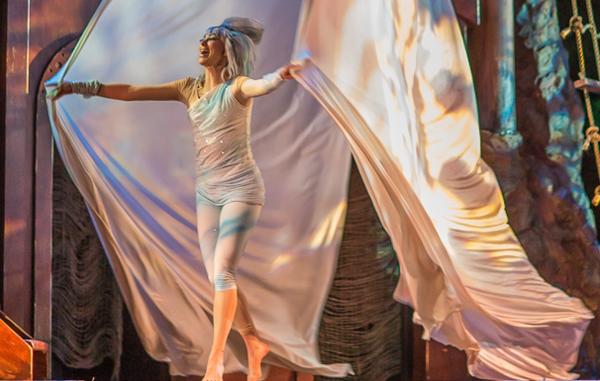 With $831,155 in total ticket sales, the festival exceeded its revenue goals for 2014 by 9.5 percent and crossed the $800,000 line for the first time in its history. The season also marked milestones for the indoor University Theatre and iconic Mary Rippon Outdoor Theatre, both of which broke records for gross ticket sales.

“We as a team are immensely proud of the work we did this season and the course we are on for the future as we approach our 60th season in 2017,” said Timothy Orr, producing artistic director, who was appointed in 2014 after serving as interim director in 2013.

For the second season in a row, CSF anticipates finishing the season solidly in the black, including a contribution to the College of Arts and Sciences in recognition of its continuing support. (Final numbers won’t be available until after private donations are tallied at the end of the festival’s fiscal year on Dec. 31.)

“The college is very happy about the outcome of last season. We’re already looking forward to next season, and beyond to the 60th anniversary,” said Steven Leigh, dean of the College of Arts and Sciences. “Tim Orr's leadership has been a key part of our success, including contributing significantly to our academic mission.”

Said Orr, “We are so fortunate to be part of this university and pleased to be able to contribute to CU’s mission of educating students. We’re grateful to our sponsors, patrons and the university for supporting us as we continue to explore Shakespeare’s relevance to the modern world through innovative and entertaining productions. And this is truly a team effort; everyone on our hard-working staff deserves credit.”

The festival will publicly announce its exciting 2015 lineup on Nov. 2 at coloradoshakes.org, with season tickets going on sale Nov. 3.

Started in 1958, CSF has produced the entire Shakespeare canon once and is closing in on the rare feat of completing it twice. CSF also produces classic works by playwrights old and new, from “To Kill a Mockingbird” to 2014’s smash hit “I Hate Hamlet.”

Tagged with:
College of Arts and Sciences, Colorado Shakespeare Festival