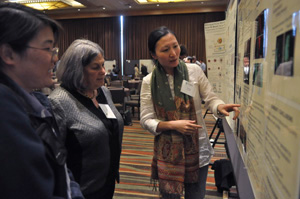 The recent Butcher Symposium brought together many of the University of Colorado’s top researchers to share their current science and to build new scientific collaborations that span disciplines and campuses.

The Butcher Symposium began in 2002 as a grass-roots effort to bring together scientists from across the CU system to create collaborations and share data. Butcher Seed Grants were awarded in 2003, 2006, 2008 and 2010 to fund potentially transformative new scientific pilot projects that required researchers with different expertise to work together to address critical challenges in the biosciences.

From developing new methods to measure the risk of premature birth to discovering the role of genetics in the development of chronic obstructive pulmonary disease, recipients of the 2010 Butcher Seed Grants presented the results of their Butcher-funded research at the Nov. 11 symposium. Presentations represented fields as diverse as mechanical engineering, biochemistry and computer science -- often in the same presentation -- and included collaborators from across CU-Boulder, CU Denver, the University of Colorado Anschutz Medical Center and National Jewish Health.

Besides the 2010 Butcher Seed Grant recipient talks, over 80 scientific posters were presented by CU researchers on topics such as genetic screening, Down syndrome, needle-free vaccines, treatment of depression and ocular disease, and many other critical areas of bioscience.

“The interdisciplinary collaboration and research represented here today shows what we can achieve as a university,” said CU-Boulder Chancellor Phil DiStefano in his welcoming remarks to symposium attendees. “We can thank Jane and Charlie Butcher for lighting the way.”

The Butcher Symposium was founded through the generosity of longtime CU supporters Charlie and Jane Butcher, who saw the potential for “big picture” scientific thinking and creative cross-discipline research to transform lives.

As well as supporting the symposium and the seed grants, their support established the Charlie Butcher Award in Biotechnology to recognize scientists from around the world who are using interdisciplinary science to make a significant impact on human welfare and health.

This year, the Charlie Butcher Award was presented to Roger Tsien of the University of California, San Diego. The Nobel Laureate and professor of pharmacology, chemistry and biochemistry is an early pioneer in developing “imaging” molecules that have opened up the cellular world to direct viewing and analysis. He described his current work in building molecules that can attach to diseased tissues and atherosclerotic plaques, allowing their precise locations in the body to be identified and tracked. He also described how these new molecular tags can be used to light up peripheral nerves and tumors with different colors, giving surgeons visual assistance to avoid inadvertently cutting healthy nerves during tumor removal.

Thanks to continued support from the Butcher family, CU-Boulder and Anschutz Medical Campus leaders, and the CU Office of the President, a new round of Butcher Seed Grants will be awarded in early 2012. Successful proposals will be funded based on their facilitation of new collaborative interactions across disciplines and campuses, and their potential benefit to the scientific community, and to human welfare and health.

For more information on the Butcher Program and on Charlie and Jane Butcher, please visit http://biofrontiers.colorado.edu/butcher

Send your thoughts and suggestions for the Newsletter.
END_OF_DOCUMENT_TOKEN_TO_BE_REPLACED