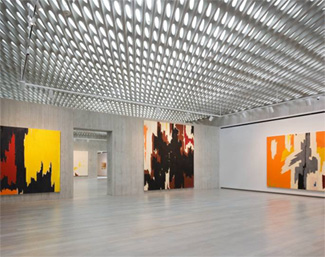 Denver has the persistence of a University of Colorado School of Medicine professor and Gov. John Hickenlooper to thank for the Clyfford Still Museum, further cementing the city’s status as an international center for art and culture.

The museum, featuring 94 percent of Still’s total work, making it one of the most comprehensive single-artist collections in the world, opens to the public Friday, Nov. 18, next to the Denver Art Museum.

Curt Freed, professor and head of the University of Colorado School of Medicine’s Clinical Pharmacology and Toxicology Division, put Denver on the path of being home to the collection of the acclaimed artist, who laid the groundwork for the abstract expressionist movement in the 20th century.

Still’s second wife, Patricia, was the sister of Freed’s mother. Freed first saw Still’s work when he was 9 years old, and was aware that Still, who died in 1980, stipulated in his will that he wanted to leave his work to an American city that would build permanent quarters to house it.

About 17 cities were negotiating with Patricia to house the collection, but no deal had been reached by the late 1990s.

“In 1999, recognizing her fragility, I went to her and said, ‘How about I approach the city of Denver and perhaps Denver will be receptive?’” Freed said. “She sent me a letter, which is now framed here in the museum, simply saying, ‘Curt, I was just thinking about Denver.’” 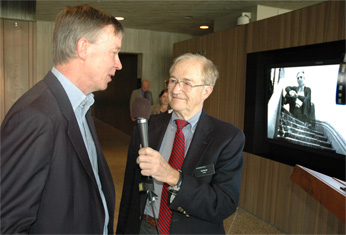 Colorado Gov. John Hickenlooper talks with the University of Colorado School of Medicine’s Curt Freed for a video crew from the CU Anschutz Medical Campus during opening festivity for the Clyfford Still Museum. Nearly all the work by Still, in photo on wall, is housed at the gallery that opens to the public Saturday.

Freed contacted Lewis Sharp, then director of the Denver Art Museum, about the collection, and he was very interested.

“Unfortunately, for four years, nothing happened until Mayor Hickenlooper, now the governor, came into office (in January 2004) and also got enthusiastic about the idea. ... He was very persuasive, and by August of 2004 we had a deal with Denver.”

Hickenlooper led a group of dignitaries, including current Denver Mayor Michael Hancock and building architect Brad Cloepfil, of Allied Works Architecture, who spoke at a press preview of the Clyfford Still Museum on Nov. 15. Hickenlooper said Freed was instrumental to Denver being selected for the museum.

“Here is once again another example of what a great university does for a community,” Hickenlooper said. “It does more than educating your kids. It brings people like Dr. Freed to town and allows us to benefit from your connections and your life’s network. ... We are certainly grateful you are here, and without you this would have never happened. We are grateful to you, the university, your aunt, everyone.”

The 28,500-square-foot museum, which features nine natural light-filled galleries, includes the Dr. and Mrs. Curt R. Freed Gallery, which will display pieces from Still’s collection of 1,575 works on paper.

Hickenlooper said the works of Still, who was born in North Dakota and grew up in Spokane, Wash., and Alberta, Canada, belonged in the West.

“He's a great representation of Denver, much the same way the University of Colorado is,” Hickenlooper said. “The university is out there doing things in a different way and trying to find different ways of teaching, not just medical students, but engineers and scientists of all sorts. That willingness to take some risk to go out there and seek out innovation and embrace it, it is uniquely Colorado. It’s uniquely Clyfford Still. It’s uniquely Curt Freed.”

Send your thoughts and suggestions for the Newsletter.
END_OF_DOCUMENT_TOKEN_TO_BE_REPLACED