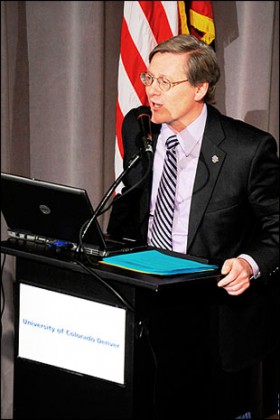 Photos by Karl Gehring of the Denver Post
Paul Teske, dean of the School of Public Affairs

Photos by Karl Gehring of the Denver PostPaul Teske, dean of the School of Public Affairs

Six of the 10 candidates vying to be Denver's next mayor faced off Tuesday, April 12, at the Tivoli Center in what has become an almost daily routine of debates and joint public forums in the crowded race to the May 3 election. The event was co-sponsored by the University of Colorado Denver School of Public Affairs.

"We have to build the retail tax base," Romer said.

Mejia called for aggressive action to "bring in grant money" from foundations and the federal government, while Spahn proposes a new retail sales plan and an initiative to "get behind tourism and be very aggressive about it."

Boigon wants line-by-line review of the city budget to eliminate unnecessary spending, and Hancock contends the best way to address the budget problem is through economic development and job growth.

The debate, co-sponsored by the School of Public Affairs, theDenver Post, Denver 8 TV, the League of Women Voters of Denver, Historic Denver and Inter-Neighborhood Cooperation, revealed subtle differences among the leading contenders. About 200 people attended the event, which will be broadcast on Channel 8 this week and available on its website. 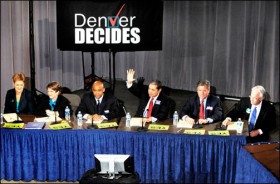 Photos by Karl Gehring of the Denver Post
Denver mayoral candidates gathered Tuesday on the CU Denver campus for a debate.

Photos by Karl Gehring of the Denver PostDenver mayoral candidates gathered Tuesday on the CU Denver campus for a debate.

While Romer said he would look for opportunities to lure big-box retailers to the city because it's "very frustrating" that Denver shoppers flock to Target in Glendale instead of boosting the city's tax revenues by shopping here, Linkhart said he'd rather see locally owned retailers thrive. "I don't like Walmart," he said.

As for public safety, all the candidates expressed concern about the police department and each offered different ideas about how to address the various problems.

"We need to streamline the discipline process," Mejia said. Boigon called for modernizing the internal affairs bureau, and Hancock proposed a greater commitment to community policing.

Send your thoughts and suggestions for the Newsletter.
END_OF_DOCUMENT_TOKEN_TO_BE_REPLACED