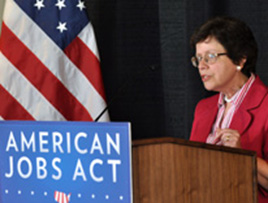 The bioengineering department was in the media spotlight Friday as Rebecca Blank, acting U.S. Secretary of Commerce, toured the bioengineering lab of Prfessor Robin Shandas, Ph.D., on the University of Colorado Anschutz Medical Campus. Her visit was part of a series of national stops to gather support for President Obama’s proposed American Jobs Act.

After the tour, Blank held a news conference to discuss the connections between research being conducted by bioengineers such as Shandas and his university colleagues.

Also on hand were Gov. John Hickenlooper, local business representatives and university leaders. Lilly Marks, vice president for health affairs of the University of Colorado and executive vice chancellor for the Anschutz Medical Campus, opened the news conference with a brief history and overview of the campus’s role as an important economic driver for the state – including the 16,000 jobs there and $419 million in clinical research. 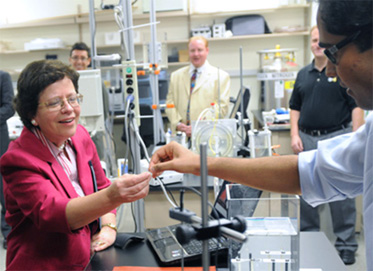 Inspired by what he witnessed in the Research 2 lab, Hickenlooper described the operation as “breathtaking.” He told those assembled, “You really get a sense that we’re on the cutting edge here. It is magical.”

The governor went on to discuss other possible economic factors – including infrastructure and bringing Fastracks to the Anschutz Medical Campus – related to the effects for Colorado that could be achieved through approval of the president’s jobs proposal.

Blank also complimented what she had observed, noting, “This is a good example of what we need to do, to create conditions to foster innovation.” She went on to list what the jobs proposal is designed to do: stabilize small business; prevent reductions in the ranks of teachers, police and firefighters; put unemployed workers back to work; and to cut payroll taxes.

She acknowledged that even if a bill passes, it likely won’t survive with everything the president is seeking. “We also still have to get our debt under control.”

As all is considered, Blank said, “We need to bet on the drive and innovation of the people to build on this plan.”

Following the news conference, the secretary participated in a roundtable discussion with local business representatives. Moderator Sueann Ambron, CU Denver’s Business School dean, triggered the conversation by asking what in the jobs proposal might affect the businesses of those at the table.

Participants talked about the jobs picture but with an emphasis on the challenges of finding the right skills among applicants. There was discussion of the importance of research happening at universities because of the dramatic decrease in research and development by companies. Another important point raised by Marks spotlighted the difficulty of bringing research lab discoveries to the marketplace.