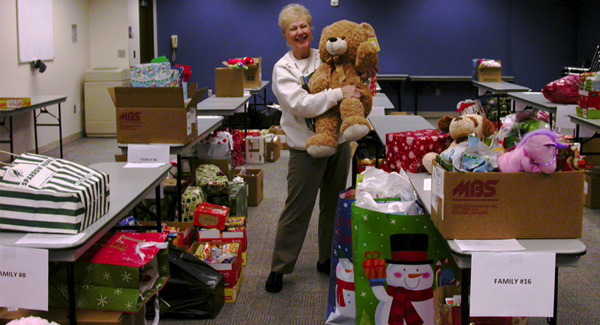 The UCCS community made a happy holiday possible for 26 families this year, providing gifts and food to celebrate the season.

The Holiday Service Project for 2011 started the first week in October with an announcement from the co-chairs requesting volunteers, providing an overview of duties to be performed, and giving notice of the first HSP meeting Oct. 20. Later that week, Botts sent a request for nominations of families in need. By early November, families were selected and Botts announced that departments, clubs, other groups and individuals could adopt and provide gifts for a family. On Nov. 10 volunteers set up giving trees, cash contribution containers and Holidrop boxes across campus to receive donations until Dec. 7. On Dec. 8, volunteers and committee members brought all the food and gifts to University Center room 116. There, they divided the food and separated the gifts for each of the 26 families.

Botts said at first glance cash donations were down compared to last year’s contributions, totaling almost $1,000. Some cash contributions came in on the final day, after the shopping and gift card buying were finished. Botts said those funds will be used for next year’s holiday project.

Many of the tag ornaments from the giving trees were taken early in the campaign and the gifts to accompany them also arrived in the final week. Botts said most trees had almost all the tags taken and one tree was hardly touched. She said locations for the giving trees may be reconsidered by the holiday committee next year.

Each child in the adopted families also received books, Botts said. Barnes and Noble teams with the project each year to collect books for all the children involved. They collected five books per child this year to be given out with the gifts.

The project owes a great deal to the Kraemer Family Library’s Food for Fines program and to Carla Myers, who introduced the concept. Allowing library patrons to pay off fines with items for the food drive benefitted everyone involved and was well received. Library donations totaled approximately 1,500 cans, jars and packaged items, and the program will likely be repeated next year.

On Dec.9, all throughout the day, someone from each adopted family came to UC 116 to claim their wrapped presents and gift baskets. Committee members took carts piled with the goods outside to load in the recipients’ vehicles.

Tagged with:
College of Letters Arts and Sciences