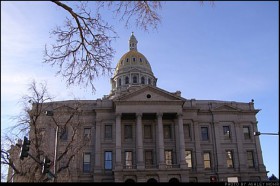 While higher education was seemingly spared when Gov. Bill Ritter on Tuesday announced $318 million in new cuts to the state budget, CU officials say the reprieve is only temporary and that additional cuts will be necessary this fiscal year.

Ritter said higher education will be cut $81 million in addition to the $150 million reduction colleges and universities have been taking since last fiscal year, but the governor indicated he would restore cuts with temporary stimulus funding. To make the cuts, the state must apply for and receive a waiver from the federal government, which had prohibited states from cutting higher education below 2006 levels (CU's budget last year was reduced to $159 million). Several states have received waivers, and it is expected that Colorado will as well. The governor also said he intends to restore funding to higher education in the 2011 fiscal year using general fund dollars.

But stimulus funding and one-time cuts to various areas of state government provide only momentary relief, said CU President Bruce Benson. And the prospects are bleak for a quick economic recovery to shore up the state general fund. The result is that CU will have to address the shortfall, in addition to the $21 million the university had already planned to take in the current fiscal year.

"We appreciate the fact that the governor will provide stimulus funds to temporarily cover the cuts, but we have to prepare for the longer-term impact by making additional cuts this year," Benson said. "We have to sustain the university over the long run, and taking cuts now will position us to address the cliff we are approaching."

The "cliff" is the difference between what the state currently provides CU ($159 million in general fund plus $50 million in stimulus funds) and what the budget will be when stimulus money is no longer available, beginning in fiscal year 2012. CU's state budget will revert to $159 million, but the news on Tuesday means the base budget could go even lower. CU's share of the additional $81 million cut will be determined in the coming weeks.

In a letter to the university community, Benson wrote that he is concerned about the ability of the state to recover quickly enough from the recession to provide adequate support to higher education.

"Without a robust economic recovery nationally and in Colorado, we are heading for a cliff," he said.

Benson said he will meet with the chancellors and senior staff to determine how best to approach the latest news.

Budget reductions will be determined at the campus and system administration levels, much as they were in the last fiscal year.