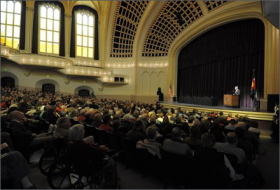 (Photo by Casey A. Cass/University of Colorado)

The University of Colorado Boulder’s annual Conference on World Affairs (CWA) returns to campus for the 64th time Monday through April 13, with 200 events including panel discussions, performances and plenaries.

More than 100 participants from around the country and the globe will pay their own way to travel to Boulder to participate in what Roger Ebert termed “the Conference on Everything Conceivable.”

“The Conference on World Affairs is one of the few events in the country where both sides of the political spectrum can come together to have wide-ranging bipartisan discussion,” said Juli Steinhauer, CWA co-chair. “It’s dialogue as it should be.”

“As conferences go, the Conference on World Affairs is entirely unique,” Franc said. “Conferences that address the major issues of the day are a dime a dozen, as are conferences that sort the like-minded into windowless hotel ballrooms or exclusive resorts to preach their shared perspectives to one another. The organizers of the CWA, in contrast, work overtime to invite participants with a variety of opinions.”

The 2012 keynote address will be delivered by Alice Rivlin, senior fellow at the Brookings Institution and founding director of the independent, nonpartisan Congressional Budget Office. Her address “Can the Center Hold: Democracy and Governance in a Polarized America” will take place at 11:30 a.m. Monday in Macky Auditorium. Rivlin will be introduced by CU-Boulder Chancellor Philip P. DiStefano.

The keynote address will be preceded by the CWA’s colorful annual opening procession. Led by Rivlin and DiStefano at 11:10 a.m., the procession will advance through the avenue of international flags on display in Norlin Quad and into Macky Auditorium.

Leading Republican strategist Mark McKinnon will deliver a talk titled “The Architecture of a Successful Message” at 11:30 a.m. Wednesday in Macky Auditorium. McKinnon is the global vice chair of Hill+Knowlton Strategies and is the co-founder of No Labels, a political organization made up of Republicans, Democrats and independents whose mission is to address the politics of problem solving.

New York Times columnist Drew Westen will deliver a plenary talk on “How Politics Lost the American People” at 1:30 p.m. Monday in Macky Auditorium. Westen is a leading voice on the psychology of politics and is the author of “The Political Brain: The Role of Emotion in Deciding the Fate of the Nation.” He has been a political adviser for a range of candidates and organizations, from presidential and congressional campaigns to Fortune 500 companies.

“Particularly in a presidential election year, when so many issues will be bubbling to the surface, I’m really looking forward to this year’s Conference on World Affairs,” Westen said. “It will be a pleasure to be in an environment where thinkers left, right and center can have a civil conversation without all the posturing and venom that comes out in a political season.”

As always, the CWA will offer not just political sessions, but a broad range of subjects and speakers. Conference panels and performances encompass everything from music and literature to environment and science, journalism, visual arts, diplomacy, technology, film, business, medicine and human rights.

Some additional highlights from the 2012 schedule include:

-- Bill Reinert, the national manager of advanced technology for Toyota who leads efforts on research, design and marketing of alternative-fueled vehicles and emerging technologies, will deliver a plenary address on the topic “Peak Oil” at 10:30 a.m. Wednesday in Macky Auditorium.

-- Chicago Sun-Times technology columnist and longtime CWA favorite Andy Ihnatko will give a plenary talk on Steve Jobs and Apple at 12:30 p.m. Wednesday in the University Memorial Center’s Glenn Miller Ballroom. Ihnatko also is a longtime columnist for Macworld magazine and one of the most in-demand commentators on Apple.

-- Grammy-winning pianists, composers and brothers Dave and Don Grusin will close the week with a talking and piano-playing duet at 2:30 p.m. April 13 in Macky Auditorium.

Members of the public attending CWA are encouraged to use public transportation, as there will be no event parking on campus. Free parking is offered on the third level of the Macy’s parking structure at the Twenty Ninth Street shopping center in Boulder, located at the southwest corner of 30th and Walnut streets, from which a free HOP bus ride is available to campus during CWA week.

For a complete schedule and more information, visit the Conference on World Affairs website at http://www.colorado.edu/cwa.