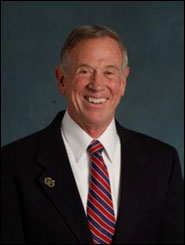 Praising a "fabulous leadership team" at the University of Colorado at Colorado Springs for insight and optimism during trying times, CU Board of Regents Chair Steve Bosley addressed the Feb. 12 meeting of the UCCS Faculty Assembly. He reported on efforts at the CU system to deal with budget issues that affect higher education, including competition for resources, constitutional complications and an under-informed public.

Bosley talked about the regents' work with CU President Bruce D. Benson in presenting CU's needs to the governor and state legislature. He said Benson uses his speaking engagements to talk about higher education as an investment rather than a cost. Lawmakers agree with this perspective, Bosley said, but find obstacles in the priorities set by the state constitution.

Another factor legislators face is that the public in general has little understanding of how higher education is funded in Colorado. Some voters believe that state funds provide 50 percent of college tuition costs, Bosley reported.  Others consider many university programs, even research, to be a frivolous waste of tax dollars. Some voters see higher education as a necessary investment for Colorado's future, Bosley conceded, but it is not their highest priority.

System administrators also are looking at solutions used elsewhere, Bosley said. Georgia, for example, has a dedicated revenue source provided by its state lottery. At this time the constraints of Colorado's constitution are problematic, he said, but everyone involved continues to seek possible alternatives.

Benson and the regents are using every opportunity to inform Colorado residents of higher education realities, Bosley said. He admitted there is sometimes difficulty in finding the right words to use but that the regents and president are dedicated to educating the public about the importance of investing in the future.

Bosley told faculty that the system admires UCCS for its conservative budgeting practices. A university can't practice deficit spending or take out enormous loans, he said. He praised the use of stimulus money in a backfill strategy rather than for operating costs, calling this as an example of the leadership team's prudent decisions.

He noted that business restructuring takes years to implement, and it will be a similar journey for the CU campuses. But by taking its budget steps with a foremost idea that economic conditions will get better, UCCS is setting an example for the state and the CU system.

Send your thoughts and suggestions for the Newsletter.
END_OF_DOCUMENT_TOKEN_TO_BE_REPLACED