Three special awards recognizing exemplary leadership and service were handed out by the University of Colorado’s Faculty Council during its April 24 meeting at 1800 Grant St. 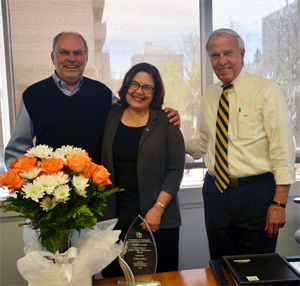 Kathleen Bollard, vice president of academic affairs and professor of Spanish, received the Leadership in Public Higher Education Award, in part, for her work with stakeholders developing policies that benefit the state, the CU community and students.

Bollard has been a CU faculty member for 19 years. The Faculty Council award resolution stated that Bollard was recognized for the “quality and integrity of her commitment to faculty rights and responsibilities,” and for using her knowledge of legislative and regulatory processes toward the betterment of all higher educators, the regents and campus administrators.

“It has been such an extraordinary privilege to work with the faculty,” she said. “It’s been the most fulfilling part of this job. I’ve met with people from all over the country from different systems and the  model of shared governance we have here and the collaborative way that administration, faculty and staff all work  together for the university and the best interest of students is really extraordinary. It’s really unusual and something I think we should all treasure.” 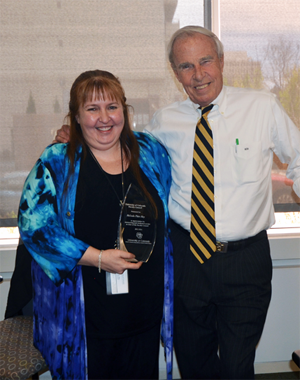 Melinda Piket-May, chair of Faculty Council, said the leadership award only has been given out twice before – to former CU presidents Betsy Hoffman and Hank Brown. “It’s a very special award and it means a lot to us to give out the award this year,” she said.

Pam Laird, professor of history at CU Denver, was given the Distinguished Service Award for her commitment to faculty rights and responsibilities and for “acting as a significant force” in improving working conditions for lecturers and instructors. Laird has served as a faculty member for more than 25 years and has been a member of Faculty Council since 2002. She also has served on numerous committees both at CU Denver and systemwide.

“It’s been a great honor to be at CU and I have to say that shared governance is what gives us a chance to make a difference,” Laird said. 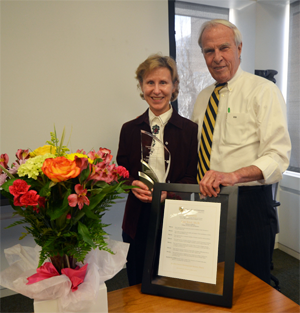 Tanya Kelly-Bowry, vice president of government relations, received the Administrator of the Year Award for serving with distinction to successfully lobby bills to assist the university campuses and their capital construction needs. The Faculty Council resolution honoring Kelly-Bowry, who has worked at the university for 16 years, pointed out that she has cultivated and built relationships with hundreds of legislators and policy leaders at both the state and federal level and has “gained the confidence and respect of the faculty while serving the best interests of faculty, staff and students.”

Her family and government relations staff looked on as Kelly-Bowry, clearly touched by the honor, received the award.

“I’ve received a lot of awards, but this one is so meaningful because you are the ones who have kept us together when state money has gone down and federal funds have dried up,” she said. “This is one of the highest honors I have ever received, and I’m very grateful to the faculty for all of the incredible work you all do.”

The council also recognized Piket-May, whose term as chair of the organization is ending. Borgelt said Piket-May has been appreciated during the past two years for the way she has strived to “do the right thing and respond in a way that captures all of the stakeholders” while advocating for faculty in a positive way.

In other business during the Faculty Council-Faculty Senate meeting: