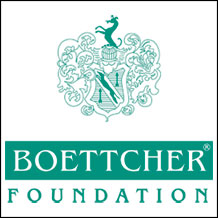 University of Colorado biomedical researchers within four years of their first academic appointment can compete for their first independent grants of between $200,000 and $250,000 over up to three years of research.

The Boettcher Foundation's program, now in its second year, is aimed at supporting early career biomedical researchers whose work has a direct impact on human health. Materials for grant applications, due Feb. 15, are available at www.cu.edu/boettcher.

Program Manager Enid Ablowitz said CU would receive $700,000 this year through the prestigious grant program, which will allow for three investigator awards. The president's office will manage the competitive peer review process for CU grant applications, and awards will be announced in June to support work beginning July 1, 2011.

Associate Vice President David Braddock, who is serving as the research officer, called the program "an exciting opportunity for early career biomedical researchers," and encouraged all qualified CU candidates to apply. Additional Boettcher investigators will be named at other Colorado research institutions.

"This program targets a critical resource gap in Colorado's biomedical research enterprise and we expect to see not only exciting new discoveries that improve human health, but also the advancement of the careers of the best and brightest of promising scientists at our research institutions," said Tim Schultz, president and executive director of the Boettcher Foundation. "No other program in Colorado is focused on these critical needs and the foundation is proud to contribute to the future of the state in this new program."

Grant recipients will receive the title of Boettcher Investigator. CU's 2010 Boettcher Investigators were: Robin Dowell, Ph.D., an assistant professor at CU's Colorado Initiative in Molecular Biotechnology (CIMB), and Gidon Felsen, Ph.D., and Paul Jedlicka, M.D., Ph.D, assistant professors at the CU School of Medicine. They were among 65 researchers from all four CU campuses who applied for the grants.

Interested researchers will find eligibility information, the application, and submission instructions at www.cu.edu/boettcher and should not contact the Boettcher Foundation directly.

Send your thoughts and suggestions for the Newsletter.
END_OF_DOCUMENT_TOKEN_TO_BE_REPLACED