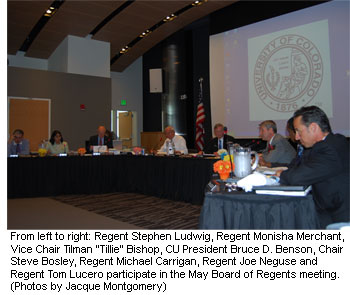 The University of Colorado Board of Regents voted 5-4 against a resolution that would have given the Silver & Gold Record six weeks to explore alternative funding options through a systemwide collaborative process involving faculty, staff and administrators.

Regent Joe Neguse (D-Boulder), introduced the resolution Tuesday, urging members to rescind or delay the university's decision to cut funding for the faculty and staff newspaper.

The weekly newspaper has been in print since 1970, but the president's office opted to close the publication as part of $6.5 million in system administration budget cuts in anticipation of funding shortfalls for the foreseeable future. CU has been forced to absorb $50 million in budget cuts for the 2009-10 and 2010-11 fiscal years.

"I respectfully ask for your support on the resolution," Neguse told fellow board members. "Over the last two days and last several weeks, we've heard from a whole lot of faculty and staff. Every stakeholder group has asked us to look at this issue." 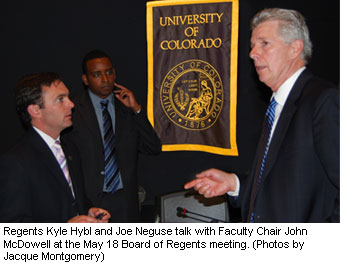 Regent Stephen Ludwig (D-Lone Tree), said he was saddened by the loss of the Silver & Gold and respected its editor and staff, but rejected claims by the newspaper's supporters that the weekly was editorially impartial. He said of all of the university's constituencies, faculty is perhaps the most powerful, "yet they get a pass by the newspaper." 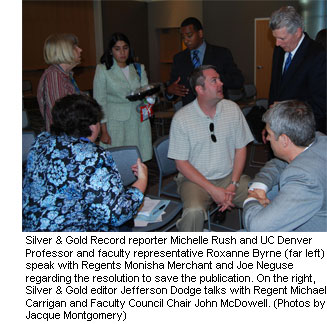 Ludwig also criticized the newspaper's policy of publishing anonymous letters to the editor by contributors claiming "fear of retribution," and noted that multiple traditional news outlets such as The Denver Post, the Boulder Daily Camera and other daily newspapers continue to cover the university and its issues "to ensure we are held accountable."

"This falls under a management issue, and is not a shared governance issue because it has nothing to do with academics," he said.

For his part, Regent Tom Lucero (R-Loveland) expressed concern that the regents were unaware that the system administration's online newsletter would include a $90,000 budget for a full-time editor and part-time writer.

Over the course of this week's two-day regents meeting, 10 faculty and staff members, most representing governance groups, addressed the board during public comment sessions, urging them to suspend the system administration's decision to cut the weekly's $600,000 annual operating budget.

"I've never seen such unanimity among governance groups," Carrigan said, citing resolutions by all three faculty assemblies and the Faculty Council in support of giving the Silver & Gold more time to come up with alternative funding models.

Among the faculty who stepped up to speak on the newspaper's behalf was Leslie Jameson, an associate professor of anesthesiology in the School of Medicine and chair of the Anschutz Medical Campus's faculty assembly.

Jameson voiced displeasure at the administration's decision to close the Silver & Gold, rejecting the notion that higher education in Colorado could succeed through a corporate management model. She argued that companies such as Google and Apple have succeeded through collaborative management environments, and that the old corporate model of a centralized administration had "brought GM and Chrysler to their knees."

For her part, Margaret LeCompte, a CU-Boulder professor of education, told the regents that the suggestion that the administration's electronic newsletter could substitute the Silver & Gold was "insulting."