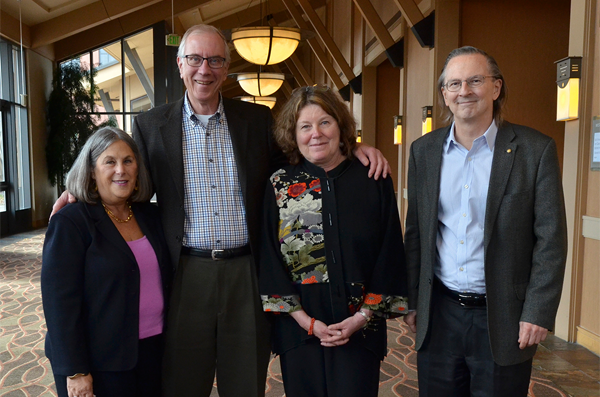 Seven recipients of the 2014 Butcher Seed Grant Awards recently were notified of their winning proposals in interdisciplinary bioscience. These grants bring critical funding to many of Colorado’s top academic researchers wanting to expand their scientific discoveries and build new collaborations that span disciplines and academic institutions. This year’s winning proposals are collaborative efforts between researchers across the University of Colorado system and National Jewish Health. Winners will receive between $70,000 and $75,000 to further their research projects.

The Butcher Symposium began in 2002 as a grassroots effort to bring together scientists from across the CU system to create collaborations and share data. Butcher Seed Grants were awarded in 2002, 2005, 2007, 2009 and 2012 to fund potentially transformative new scientific pilot projects that required researchers with different expertise to work together to address critical challenges in the biosciences.

The Butcher Program was founded through the generosity of longtime CU supporters Charlie and Jane Butcher, who saw the potential for “big picture” scientific thinking and creative cross-discipline research to transform lives. The seed grants were awarded this year thanks to continued support from the Butcher family, and CU-Boulder and CU Anschutz Medical Campus leaders.

In addition to supporting the symposium and the seed grants, the support from the Butchers also established the Charlie Butcher Award in Biotechnology to recognize scientists from around the world who are using interdisciplinary science to make a significant impact on human welfare and health. The 2013 award went to Harvard biologist Jack Szostak, whose discovery of how chromosomes are protected by telomeres won him the 2009 Nobel Prize in Physiology or Medicine.

For additional information on the Butcher Program and on Charlie and Jane Butcher, please visit: http://biofrontiers.colorado.edu/butcher.

This year’s winning proposals offer an exciting look into the biomedical research going on in Colorado, covering everything from studying seizures in the brain using small fiber optical devices, to finding ways of using the vast collection of microbiome data for diagnosing disease. The awardees are:

“Developing a Platform for in vivo Imaging of Chronic Bacterial Infection”

As a new extension of the Butcher seed grant program, grants for graduate students and postdoctoral fellows were sponsored by the student-led BioFrontiers Science Alliance. These monetary awards were made possible through generous donations from Roy Parker, Leslie Leinwand and Mike Yarus, and the BioFrontiers Institute. To be eligible, these research projects needed to be led by a CU-Boulder graduate student or postdoctoral fellow with a collaborator from a different department. These researchers were also required to present a poster about their work at the 2013 Butcher Symposium. Seven applications for the grants were submitted.

“Characterizing structural variants in a mouse model of alcohol dependence”