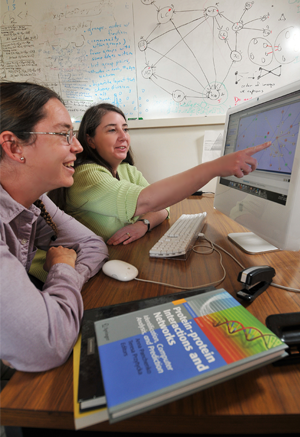 If you were alive during the late 1990s you might have noticed a little era called the dot-com bubble. It was a time when Internet-based companies like Amazon.com, and IT-focused companies like Cisco, rose to power. Generous venture capitalists and soaring stock prices sent many students running into the ranks of computer science, dreaming of a healthy paycheck and lifelong job security.

The stock market peaked on March 10, 2000, with the NASDAQ bringing in a scorching $5,132.52 in intraday trading. Like all things that go up, the NASDAQ came down. Cisco saw an 86 percent decline in its stock. Amazon eventually went from $107 per share to a meager $7. Students fled to other disciplines amid rumors that the tech industry would never recover and their jobs would be outsourced to overseas companies.

The funny thing about computer scientists is that they are used to living on the edge of technology. While the business of the Internet was crashing down, these scientists were turning their attention to their next big challenges, retooling their approaches and honing new skills. They were blazing trails into interdisciplinary research and education because they were interdisciplinary by nature.

Dilbert-esque stereotypes aside, no one can argue that all fields have computational needs. From medicine to math, everyone is deluged by data and looking for a way to make sense of it all. Debra Goldberg, a BioFrontiers faculty member and assistant professor of Computer Science at the University of Colorad Boulder, is her subject’s biggest fan.

Goldberg came to computer science via the scenic route, first getting a bachelor’s degree in biology, a master’s degree in computer science and then a Ph.D. in applied math. In between, she spent time at Johns Hopkins as a research programmer and, later, eight years in the aerospace industry. She can convince even the most math-phobic of us that computer science is the degree we want.

Because almost any field has computational needs, a degree in computer science is the Swiss Army knife of any educational endeavor. Goldberg’s career path is proof that computer science is extremely flexible. Her personal challenge is getting more people to see computer science as the jack-of-all-trades degree that is at home in the life sciences.

Goldberg tackled this issue at its source: high school. In an experiment funded by the National Science Foundation as part of the Engaging Computer Science in Traditional Education, or ECSITE (pronounced “excite”) program, Goldberg and her graduate students worked with Advanced Placement, or AP, biology teachers at two local high schools to create a unit to help students gain a deeper understanding of genetic evolution using computer science and biology.

During the unit, students were given a crash course in algorithms: a series of steps used in solving a problem. Students were then given an algorithm currently used to compare DNA sequences. Later the students used a different algorithm to build evolutionary trees for genetic diseases.

Goldberg received a variety of reactions to the curriculum. Students loved using the same tools used by scientists. They also enjoyed the hands-on activities involved in learning about algorithms when a small task, like making coffee, was turned into a series of steps and acted out in a “Human Computer.”

As with all things in education, there were also a few challenges. While most students saw the interconnectivity between computer algorithms and biological science, a few had trouble seeing the relevance to their schoolwork. Another challenge: high-stakes testing. A small subgroup of students were unwilling to take on additional subjects if they felt the time spent studying them wouldn’t pay off on their AP exam. Long term, Goldberg would like to see computational biology added to AP exams. In the near term, she feels that computational methods can still be part of a healthy biology class, even a class studying for a high-stakes exam.

“I absolutely think that teaching computer science in the context of biology pays off in high stakes exams,” Goldberg said. “Our next step is to make that connection clearer to students early on in the program.”

Goldberg is pleased with the reactions: the successes and the challenges. If students don’t think computation belongs with biology, she doesn’t seem to take it personally.

She has the two essential elements of a good teacher: an innate feel for when she’s lost her audience and a deep reservoir of techniques to lure them back in. Armed with both, Goldberg is tweaking her program so that it leaves high schoolers with the feeling that computer science is an essential companion to biology, and a key to success on AP exams. With computational needs expanding exponentially, there isn’t a doubt that computer science will once again have its heyday, and those students who are listening to Goldberg right now may just find themselves at the forefront of the next wave in computing.