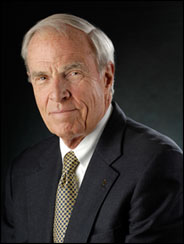 University of Colorado President Bruce D. Benson today lauded employees for "pulling together as a team" in the face of budget challenges, but warned of more difficult times ahead.

Benson spoke to system administration employees in Boulder this morning at the Grusin Music Hall for the president's annual convocation address. He will speak to system employees in Denver at 7:30 a.m. Friday at 1770 Sherman St.

"It's a team effort across the campuses and with central administration, and I can't tell you how much I appreciate what you do," Benson said. "I know how hard people are working. We have all made a major commitment to our students and the state.

"We've been around for 133 years, and our job is to sustain and enhance this great university."

He cited several examples of faculty and staff pulling together, including the phased implementation of the Integrated Student Information System project by staff in University Information Systems, Employee Learning and Development's creation of specialized online training courses and the electronic imaging project in Payroll and Benefits Services that is converting 1.7 million pages to electronic files.

Benson said teamwork is particularly important in light of news this week that the state budget continues to head south. Gov. Bill Ritter on Monday announced that recent revenue estimates show the state is short an additional $240 million in the current fiscal year. Higher education's portion of the shortfall has yet to be determined.
"The state is pretty broke and it's only going to get worse," Benson said. "These are really troubling numbers."

In response, the president said CU would take a three-pronged approach to balancing its budget: improve revenues, enhance efficiencies and make strategic cuts. A key facet of the first two strategies will be to work with the governor and legislature in the upcoming session of the Colorado General Assembly on legislation that will free CU and other higher education institutions from onerous regulation in areas such as purchasing, financial aid and tuition setting.

Benson said the university has "done a really good job operating with the small amount of funding the state gives us." Yet he also said the university cannot continue on its current path, where some 40 percent of state funding has been cut over the past two budget years.