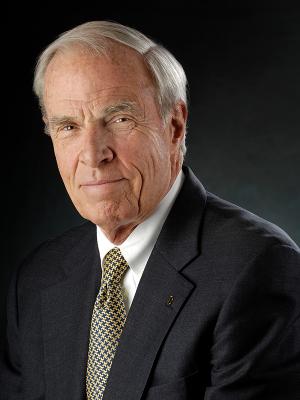 “Efficiency,” “reputation” and “culture” are common keywords that University of Colorado President Bruce Benson uses when speaking to the CU community. At the Faculty Senate’s Nov. 30 meeting at Denver’s Warwick Hotel, he offered numbers to illustrate growth in those areas over the past decade.

With the 10th anniversary of his CU presidency just months away, Benson presented several key performance indicators that compare today to the 2007-08 fiscal year. Among them:

“We just play the cards we’re dealt and keep moving,” Benson said. “I think people understand how underfunded we are.”

While state funding remains a challenge, state lawmakers over the past decade have partnered with CU in helping to pass 16 bills that allow for greater operational efficiency – such as procurement cards, the capital construction approval process, negotiating purchasing contracts and more.

Also furthering efficiency: winnowing the number of university policies to 88 from 210 a decade ago. By self-insuring, begun in 2011, CU saves between $3 million and $4 million annually, while an insurance audit instituted in 2012 saves $2.8 million annually.

The launch of the Visiting Scholars in Conservative Thought and Policy at CU Boulder has boosted diversity of thought, Benson said.

Such improvements across the four campuses contribute to positive evolution of CU’s reputation, he said.

“Right now, we poll at 75 percent positive, which is up 8 percent since the last poll,” Benson said of impressions of CU among Coloradans. “I would love to get that up to 80 percent. But overall, people are pleased with this university. Keep up your great work.”

In other business at last week’s Faculty Senate/Faculty Council meeting: