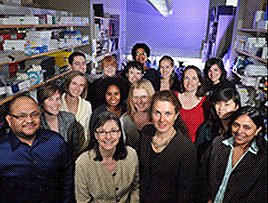 Research on breast cancer after pregnancy at the University of Colorado Cancer Center is reaching a key milestone thanks to a gift from nationally renowned cancer research charities in celebration of Denver being host city for the 2012 NCAA Women’s Final Four.

The Kay Yow Cancer Fund and the V Foundation for Cancer Research annually fund cancer research based in the host city of the basketball tournament. This year, the $100,000 grant will fund continuing work at the University of Colorado Cancer Center aimed at preventing young women’s breast cancer.

“We’re at the point where this money will help us finalize the data we need to support a clinical trial for the prevention of postpartum, pregnancy-associated breast cancers,” said grant recipient Virginia Borges, M.D., MMSc, a CU Cancer Center investigator and co-director of the center’s Young Women’s Breast Cancer Translational Program.

Nick Valvano, chief executive officer of the V Foundation for Cancer Research, and Megan Smith, director of marketing and development for the Kay Yow Cancer Fund, presented Borges with a ceremonial check at a news conference at the Anschutz Cancer Pavilion on Dec. 1, about 100 days ahead of the NCAA Women’s Final Four, to be held in Denver on April 1 and 3.

“It is so encouraging to fund research whose target is not only the treatment of breast cancer, but the prevention as well,” said Valvano. “We are proud to be associated with this project.”

“The women’s basketball community has been incredibly supportive of the Fund since its inception, especially during the month of February,” said Marsha Sharp, executive director of the Kay Yow Cancer Fund. “With this in mind, it is very fitting for us to fund research on young women’s breast cancer in the host city of the 2012 Women’s Final Four.”

Borges and Schedin published a paper in Nature Medicine in July 2011 that showed that non-steroidal anti-inflammatory drugs (NSAIDs) like ibuprofen reduce the severity of postpartum breast cancers in animal models, and now the research team will move the preclinical results toward humans.

Not only is breast cancer more prevalent in young mothers than in women who have not had a child, but cancers diagnosed in the early years postpartum also tend to be more aggressive, with increased risk of spreading to other organs.

The pair’s work shows that NSAIDs reduce the wound-like qualities of breasts undergoing the process of involution, during which milk-producing cells are killed and replaced with fat cells. During involution, healthy tissues can be invaded by fibrous collagen, which promotes tumor growth and travel into the lung. NSAIDs decrease production of the enzyme COX-2, which promotes the growth of this fibrous collagen.

“Dr. Schedin and I are the right arm and the left arm of this research organization, and so this grant from the Kay Yow and Jimmy V Foundations will directly fund research that benefits young women,” Borges says.

Borges and Schedin are faculty in the CU medical school, and Borges provides breast cancer care at University of Colorado Hospital.

CU School of Medicine in the U.S. News and World Report rankings

CU selects Marks as next chancellor of Denver campus

Regents begin search for University Counsel, Secretary of the Board

CU selects Marks as next chancellor of Denver campus

Send your thoughts and suggestions for the Newsletter.
END_OF_DOCUMENT_TOKEN_TO_BE_REPLACED

The Conference on World Affairs offers five virtual sessions next week. Which daily topic most interests you?