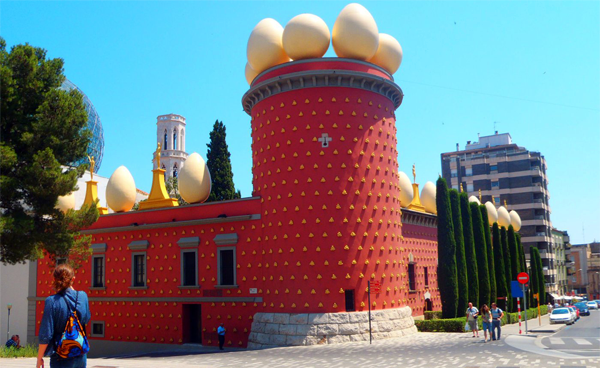 Students in Frances Charteris’ seminar examining the art of Spain have been known to shed tears when they stand next to a famous painting or sculpture they have only viewed in textbooks or slideshows. In particular, Franciso Goya’s paintings of Napoleon’s invasion of Spain – some measuring 10 feet by 18 feet – stir emotions.

Participants of the summer, study abroad course visit museums, cathedrals, historic areas and buildings in Madrid, Barcelona and Granada, as well as other sites, to study Spanish art from Goya to 1990. It’s an ambitious agenda and is no summer vacation. Along with site visits, there is classroom work: The readings are difficult and numerous; there are quizzes, an oral presentation, mid-terms and finals, and a research project.

Charteris has led the University of Colorado Boulder study abroad Art in Spain course since 2010; this year’s gets underway in May. She initiated a similar seminar – The Art of France – in 2005. Now the two programs alternate each year.

The chance to witness the drama, passion and cultural importance of artwork draws students from a variety of disciplines, Charteris says. Art and art history majors gravitate toward the global seminar, but so do math students, those interested in creative writing, even students who are specializing in international affairs.

The Spain program is different from any other, Charteris says, because of the extraordinary amount of work packed into the five-week course. While discussion of paintings, sculptures and architecture dominate the class, students focus on photography – Charteris’ own specialty – and film during the final week of the program.

Students are encouraged to explore the culture in other ways. Their time is their own during evenings and weekends, which allows them to bond with one another and their host country. Each week, they are required to write a short cultural narrative about their interactions with residents, whether it be purchasing fruit or a handbag or asking for directions. They participate in a guided tapas meal and walk through Madrid, which comes alive in the evenings. Students also have the option of attending a bullfight. 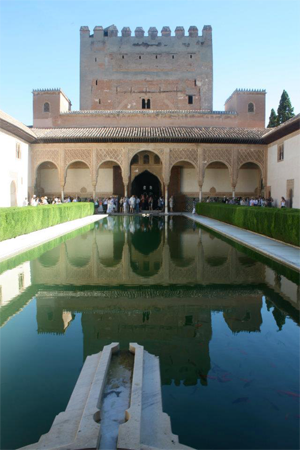 The Alhambra is among the site visits for students.

Charteris usually takes them to one of her favorite destinations, the Alhambra, the medieval palace/ fortress that has been transformed into one of Spain’s most visited attractions. Students learn about the Moorish influence on the country as they view the site’s water gardens, overlapping painted tiles, and the buildings’ star-shaped cutouts in ceilings.

“It’s important to see the one place where you get a sense of the Arab presence in a dominate way. The Alhambra is one of the most beautiful buildings I’ve ever seen and the students love it,” Charteris says. “The view is very moving and Granada is a small, ancient town where you can walk all over. The people are nice and it has a peaceful, gentle energy.”

Just steps away is El Albaicin, an ancient district that is home to a marketplace where crafts and other goods may be purchased, and the mountain caves where Flamenco dancing was born.

“Spain has an intimate connection with France, given the Napoleonic invasion. And Goya is a giant figure who influenced artists like Edouard Manet. Barcelona is connected with the Art Nouveau movement and is like Paris in many ways,” Charteris says.

Participants visit the Museu-Teatro Salvador Dali where Dali spent the last 15 years or so of his life creating. He is buried in a crypt in the museum’s basement. They also tour the Museo del Prado, the Museo de Romanticismo and the Museo Thyssen-Bornemisza, to name a few. This year, the group also will visit a monastery at Monserrat, about 30 minutes from Barcelona. The abbey there has an enormous collection of modern art, Charteris says, including pieces by Dali and Picasso.

She takes about 12 to 15 students on the trip; otherwise, she says, the experience is like “herding cats. We have a hard time crossing the street together or eating together” because of the crowds of tourists. The students earn six credit hours for the course, and for many, it is the first time they have been outside the United States.

Perhaps one of the most gratifying experiences the students have is standing up to present their oral presentations in one of the museums. Charteris says that often tourists gather around and listen as the students talk about what they have learned. “They are always surprised about how much they learn, or to see the works of artists they’ve never heard of. And who wouldn’t be pleased to have strangers listening to you, hanging on your every word?”

Send your thoughts and suggestions for the Newsletter.
END_OF_DOCUMENT_TOKEN_TO_BE_REPLACED