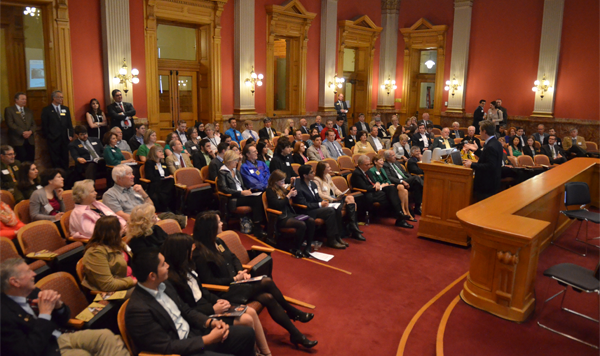 Alzheimer's disease is a "tsunami which will sink us if we don't solve the problem," said Huntington Potter, Ph.D., director of the Alzheimer's Disease Research and Clinical Center at the University of Colorado Anschutz Medical Center, during CU Advocacy Day at the state Capitol on Monday.

Potter was keynote speaker at this year's CU Advocacy Day, which drew about 200 participants from across the CU system for a day of reinforcing the university's economic, research and educational impact to those who set policy under the gold dome. The event was hosted by the CU Office of Government Relations and CU Advocates Program and drew lawmakers; several CU Regents; CU President Bruce Benson and his wife, Marcy; Don Elliman, chancellor of CU Denver | Anschutz Medical Campus; Lilly Marks, vice president for health affairs and executive vice chancellor of the Anschutz Medical Campus; and many CU Advocates.

Benson thanked the CU Advocates for participating in the statewide advocacy effort launched about two years ago. He also highlighted CU for Colorado, which brings attention to CU's involvement in hundreds of programs and clinics around the state.

"We're doing a lot for the citizens of Colorado, and we want everyone to know about it," Benson said. "I want to thank all of you for what you're doing. These two programs are very, very important to us."

Benson received a special honor from both chambers of the Legislature. Sen. Rollie Heath and Rep. Dickey Lee Hullinghorst led the joint tribute to Benson, who recently became the longest-serving CU president in more than 50 years.

Michael Carrigan, chair of the Board of Regents, began the morning by thanking CU Advocates—a group 2,400 strong and growing— for their service to the university.

"The CU Advocates, led exceptionally by Michele McKinney, help (the regents) go out and preach about the way the University of Colorado runs," Carrigan said. "We are four campuses doing great work. We need you to know about the great things CU is doing. Get the word out to elected officials, many of whom are in this building, and in your home communities. Thank you so much for adding your voice to that great chorus."

After receiving an introduction from Sen. Michael Johnston, whose father is battling Alzheimer's, Potter framed the profound scope of the disease. With half of the population expected to get Alzheimer's by the age of 85, it is the nation's top long-term health care issue.

"The current cost of Alzheimer's disease to the country is about $200 billion a year," Potter said. "By 2050, Medicare and Medicaid alone will spend $1 trillion a year on Alzheimer's if we don't solve this problem."

Potter explained the research and clinical trials occurring at CU, which is helped by collaborations between the School of Medicine's Department of Neurology, the Alzheimer's Disease Research and Clinical Center, the Memory and Dementia Clinic, and the Linda Crnic Institute for Down Syndrome. CU Anschutz is an international leader in research into the connections between Alzheimer's disease and Down syndrome.

"That is one of the reasons why the university is such an important place (for research)," Potter said. "If you have collaboration between different groups of scientists, people working on rheumatoid arthritis, people working on cancer, Down syndrome, Alzheimer's disease—talking and working together—they're much more likely to get something good out of it."

Potter said the university is applying for a National Institutes of Health grant of about $1 million per year for five years to ensure that CU Anschutz becomes home of one of the nation's federally designated Alzheimer's disease research centers. Currently, the Rocky Mountain and Midwest regions lack such a center.

"People have stood up and said they think this is important and what we hope now is that we can expand this (fundraising) to other donors, especially the Legislature, because they represent all Coloradans, and they're the ones who are going to benefit from the center," Potter said.

Three legislators—Reps. Kevin Priola and Mark Waller and Sen. Andy Kerr, who is a co-sponsor of SB1, which aims to add more than $100 million of reinvestment to higher education and restore a 6 percent cap on tuition rate increases—spoke to the CU group in the Old Supreme Court Chambers of the Capitol. The legislative contingent was introduced by Tanya Kelly-Bowry, vice president, CU Office of Government Relations.

Priola, an alumnus of CU-Boulder, said he works to point out to his statehouse colleagues "what a strong economic driver the University of Colorado is for the entire state and region. It's a precious gift and we have to not just maintain it but we need to strengthen it going forward."

Waller, House Minority leader in 2013, noted that he was the first person in his family to go to college. "Our responsibility as government officials is to create equal opportunity for individuals, and I know that higher education does that for people in this state."

Following visits to the floors of the Senate and House chambers, Advocates returned to the Old Supreme Court Chambers for a Q&A session with Potter, and to hear from Kelly-Bowry and Todd Saliman, vice president and chief financial officer, who briefed the audience on House Bill 1319. The legislation, introduced last week by House Speaker Mark Ferrandino, would change how state funding is distributed among higher education institutions. More money would be funneled into the College Opportunity Fund (COF), which follows resident students to the state institution of their choice, and allocation to colleges and universities would be based partly on factors such as student retention and graduation rates.

Saliman said CU isn’t opposed to the bill, but does have “serious concerns” about its impact and unintended consequences. Based on current figures, some colleges and universities would benefit from such changes; others, including CU, would stand to lose funding.

While Ferrandino has said he wants the bill passed into law during this, his last year in the House, Kelly-Bowry noted that CU’s Government Relations team successfully lobbied to have its implementation delayed until 2015-16, should it become law.

Ferrandino was expected to meet with governing boards of state institutions today; Kelly-Bowry said Advocates will be kept informed about developments at the Capitol, and may be called upon to contact legislators and comment on CU’s behalf depending on how the process unfolds.

-          Cathy Beuten and Jay Dedrick contributed to this report.