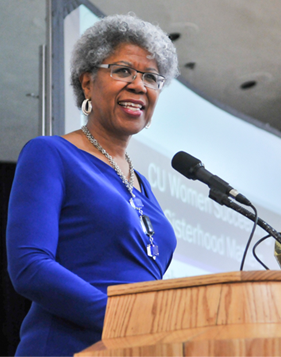 Allen, professor of communication and associate vice chancellor of diversity and inclusion at the University of Colorado Denver l Anschutz Medical Campus, received the award, which honors an outstanding faculty member for efforts to advance women in academia, interdisciplinary scholarly contributions and distinguished teaching.

She devoted most of her award speech, the second of two during the professional development symposium, to celebrating the many women who have provided support and guidance during her life and career, including 24 years as part of the University of Colorado. She also said CU must continue to strive toward including more women across all levels of faculty and staff.

“Every job is a valuable and important job,” she said. “However, we absolutely need to have many more women across all levels of our campuses. And we need to have a variety of women in those positions. How we get to that is, becoming more empowered.”

Gee was among the several CU women Allen honored in her speech, along with several other names familiar across the CU system: Elaine Tompkins, Polly McLean, Anna Spradlin, Karen Lee Ashcraft, Pam Shockley-Zalabak, Ellen Stevens and many others.

“What’s really important to me is to think about the variety of ways all these women are the wind beneath my wings. I hope that I am that as well for them,” Allen said.

When women recognize the other women supporting them, Allen said, that habit “can disrupt some of the kinds of things I hear women saying about women: ‘You know how women are …’ Stop doing that! We have to transcend that. The backbiting and gossiping and negative qualities that get attributed to women happen partially because sometimes we do that. Sisterhood denies that we engage in those kinds of behaviors.”

Allen recounted her life story, being raised in Ohio by her mother after her father died, and becoming the first person in her family to go to college. She still is the only family member to have master’s and doctoral degrees.

She said she was recruited to CU-Boulder in 1989 “as a two-fer – colored and curved! Black and female.” To laughter from the audience, she acknowledged that she frequently plays with the ideas of self-confidence and vanity in how she presents herself. After strutting across the stage to show off her dress, she said, “Don’t hate – emulate. … We, as women, should celebrate one another, support one another.”

Workshops throughout the daylong event found faculty and staff from across the system, as well as visitors from other universities and organizations, offering presentations that ranged from research about women in higher education to leadership and achieving balance between career and personal life.

CU Denver’s Laura Argys and UCCS’s Mary Coussons-Read offered perspectives on women’s careers in higher education, including research findings that women are less likely than men to be full professors.

“There are gaps in pay, too, but they’re really related to progressing through the ranks,” Argys said. “Some people would call it a glass ceiling; it’s certainly quicksand – you don’t get there fast.”

Coussons-Read offered guidance on how to negotiate: “No matter what you’re negotiating for, you have to separate the people from the problem,” she said.

Tamara Moore of UCCS presented “Opening the Door to Now,” in which she stressed the benefits of focusing on the present moment, rather than dwelling on past failures or worries about the future.

“The only legitimate reason for fear is built around immediate danger in the present moment,” Moore said while showing a slide of a roaring grizzly bear. “This present moment is the only place you have influence at all. That knowledge becomes pretty powerful.”

Loraleigh Keashly of Wayne State University presented research on – and tactics for dealing with – workplace bullying.

She said women and men are equally likely to be on either end of workplace bullying, but there are differences within those groups. Direct, overt behavior is more likely by men; women are more likely to rely on indirect behavior, such as spreading rumors or gossip. Women who bully are more likely to target other women.

However, similar behavior can be characterized differently depending on gender: Men acting one way are often described as “assertive,” while women showing the same behavior are seen as “aggressive.” Because of that, Keashly said, women are punished more severely than men for the same behavior.

Keashly suggested the Workplace Bullying Institute’s website as a good source of information where people can assess whether certain behavior qualifies as general work conflict or bullying.

Next year’s CU Women Succeeding will be hosted by the CU Anschutz Medical Campus.