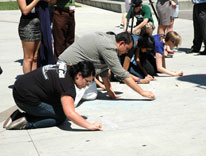 Vigil attendees write messages in honor of the shooting victims and their families on the sidewalk at Tivoli Commons.

Members of the Auraria community paused together the afternoon of July 26 to honor the victims, families and friends affected by the July 20  theater shooting in Aurora.

More than 100 people attended the 30-minute vigil, which concluded with the release of 45 doves over the Tivoli Commons as bagpipers played “Amazing Grace.”

The vigil was organized by student government leaders and Office of Student Life representatives at the University of Colorado Denver, Metropolitan State University of Denver and Community College of Denver. Officials representing each institution spoke briefly.

Raul Cardenas, CU Denver associate vice chancellor for student affairs, thanked the student leaders for coordinating the vigil. He said the Auraria community wanted to honor the victims and their families.

"I think it's symbolic in these times of duress that we come together, regardless of what institution we belong to, that we're all one in this regard and we're all here to support each other," he said.

Ruth Possehl, clinical supervisor for the CU Denver Student and Community Counseling Center, said it is normal for people to be experiencing a spectrum of emotions in the tragedy's wake.

"This experience is like an ocean of grief," Possehl said. "This is an island of respite. We're here to be an island together because of our strong feelings of what happened in our community."

Large portraits of some of the shooting victims were displayed in front of the commons' stage. A row of candles sat in front of them, as well as colored chalk sticks for attendees to write messages on the plaza sidewalk.

Taylor Floyd, a CU Denver graduate student in accounting, said she was glad to see the support. She attended a July 23 campuswide forum where an attendee asked university officials if a vigil was in the works.

“It's really been affecting me,” Floyd said of the tragedy. “I just wanted to help, I guess. I was really glad to see my campus was going to do something to commemorate (the victims). It's not just the victims, it's the families, too. My heart is with them. I'm just glad to see our community come together."

Gordon Hamby, CU Denver student body president, performed with his guitar and harmonica. He sang the song "When I Look Up in the Sky."

"I wrote it last night," Hamby said. "I looked for songs, but nothing seemed to fit the bill."

He said it is important for the various institutions at Auraria to "show a sense of solidarity" as the community moves through the healing process. "It just helps the process and helps bring people together to realize that we're all in this together in the big picture -- we're not alone out there."

Here is a list of Campus Resources to help people cope with the tragedy.