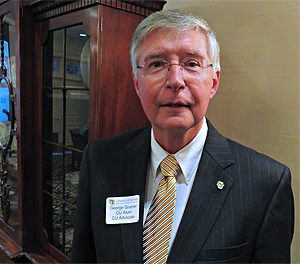 George Gramer at the Denver Country Club on Tuesday night.

Born and raised in Clinton, Iowa, high school student George Gramer had narrowed his target list of universities down to four: Stanford, Texas, Arizona and the University of Colorado Boulder.

“If I’d seen the University of Arizona campus, I perhaps would have gone there,” Gramer says. But of the four, he only had visited one: CU-Boulder. And it was love.

More than 40 years later, his love for the institution has never waned, and indeed has helped him garner honors as this year’s CU Advocate of the Year. The recognition comes from the CU Advocates program in the Office of the President.

“It’s an extremely important honor,” says Gramer, who received the award Tuesday night at the Denver Country Club at a reception hosted by President Bruce and Marcy Benson. “To be recognized by the university for a second time is an extremely high honor.”

As a U.S. Army intelligence officer, Gramer gave 29 years of service to the military in a career that took him far from his Midwestern roots, across the nation and overseas to Panama, Honduras, South Korea and Bosnia.

“Wherever I went and met other Buffs, we were all proud to be Buffs,” he says. “Anytime I met an officer from CU, we immediately had that bond.”

He collected such high honors as the Legion of Merit and the Defense Superior Service Medal before retiring as a colonel in 2003.

Gramer chose to make his home in Colorado once again seven years ago, partly so he’d be close to his alma mater.

“I guess you never get tired of loving CU,” he says.

He continues his streak of donating to CU every year since 1978, while also logging plenty of miles between his south Denver home and Boulder, where he continues to take part in board meetings and to attend football games and other events.

He joined the CU Advocates program in its first year, 2011, and has attended nearly half, or about 30, of its educational presentations during that time.

“It’s a learning process, so that we can talk adequately with legislators we meet and other people who are important in the state budget process,” Gramer says. “As an Advocate, you learn a tremendous amount of things about the Colorado state budget, about the outstanding professors at the campuses. You get to meet the leaders of the university, and you see many more people from all the campuses. It’s very important, because CU is doing extremely important work worldwide – not just in the state of Colorado.”

CU Advocates, which now counts 2,700 members, offers about 24 advocacy-related events annually, providing insight and talking points on the university’s greatest achievements and challenges. Gramer says his interest in politics and personal interaction with lawmakers led him to join.

“I’ve met the governor and his opponent, many state officials, and I know some of them personally,” Gramer says. “Knowing I’m a huge fan of the CU Advocates program, I think it says to them, ‘You know, George is really involved in this – if we have extra money to give, maybe it is worth giving that to CU.’ When you receive (less than 6 percent) of your funding from the state you’re named for, it makes people wonder.

“It’s extremely important for legislators to know that CU is doing good things – and making huge amounts of money for the state. The Anschutz Medical Campus makes more money for the state than the entire ski industry. We’ve got to get that story out. People are shocked and surprised when they hear that.”

Gramer is the second recipient of the CU Advocate of the Year Award, following last year’s presentation to Alvin Rivera of Pueblo.