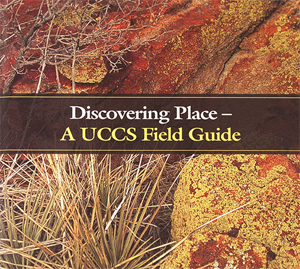 Tom and Carole Huber did not set out to create a publication to celebrate the 50th anniversary of the founding of UCCS.

Instead, a project intended to celebrate and help preserve the treasures of campus and serve as the core of a course team-taught by the couple, grew into one of the cornerstones of the celebration that officially begins Jan. 1, 2015. The Hubers are co-editors of a project that spans more than 280 pages and involves more than 37 faculty, staff and students.

“Discovering Place – A UCCS Field Guide” is no coffee table-bound book full of glossy pictures of happy faces. Instead, its pages celebrate the plants, animals, climate and water of the UCCS parcel as well as the people who inhabited the area long before the university. Through words, photographs and drawings, readers can trace the history of the campus from the upper Cretaceous age of 75 million years ago to the strategic plans for the future.

Though vastly different in style and content, the 24 chapters in “Discovering Place” have a common thread.

“People who know a place may come to care about it more deeply. People who care about a place are more likely to take better care of it. And people who take better care of places, one place at a time, are the key to the future of humanity and all living creatures,” Carole Huber said, quoting Robert L. Thayer, a professor emeritus at the University of California, Davis. “This was the inspiration behind the book.”

“Discovering Place” is modeled after a similar publication published by California Polytechnic University-San Luis Obispo. Tom Huber, professor, Department of Geography and Environmental Studies, was inspired by what he saw from Cal Poly and wondered if it was possible to get others to assist and where funds could be found for such an ambitious undertaking.

Both concerns were quickly dispatched.

Chancellor Pam Shockley-Zalabak recognized the potential of the Hubers’ idea and connected the project to the 50th Anniversary. And every faculty member asked to contribute not only agreed to help but did so on deadline.

For more than a year, contributors toiled on their chapters. Both Tom and Carole, senior instructor, Department of Geography and Environmental Studies, served as the project’s editors and set a goal of allowing each chapter to reflect the author’s voice. There was minimal editing.

“I was astonished,” Tom Huber said. “Everybody got their material done on time. That’s often not the reputation that faculty have.”

The contributors list reads like a who’s who of UCCS past and current. It includes current and former Department of Geography and Environmental Studies faculty members Eric Billmeyer, Cerian Gibbes, John Harner, David Havlick, Paddington Hodza and Steve Jennings. That list was extended to include contributions from Department of Visual and Performing Arts faculty Matt Barton, Carol Dass, Pauline Foss, Suzanne MacAulay, Curtis Smith and Glen Whitehead. Mary Jane Sullivan from the Department of Philosophy also contributed as did Jeremy Bono from the Department of Biology and Minette Church, William Arbogast and Roche Lindsay from the Department of Anthropology, Kirsten Ortega from the Department of English and Rebecca Webb from the College of Engineering. Others include provost emerita Margaret Bacon, retired Kraemer Family Library instructors Judith Rice-Jones and Cathy Mundy, Gary Reynolds of Facilities Sevices, Jeff Foster of University Advancement and Perrin Cunningham of the Heller Center for Arts and Humanities. Two students, Sara Santa Cruz and Katelyn Stover, made significant contributions with several other students providing photos and other materials.

Tom and Carole Huber hope the book will serve as both impetus and a guide for campus community members to explore the flora, fauna, wildlife and geography that make the UCCS campus unique. In that way, Carole Huber explained, the words of Cal-Davis’ Thayer can be realized and the campus preserved for the enjoyment of future generations.

The efforts of all of the book’s contributors will be celebrated during a wine and cheese reception scheduled for 4 p.m. to 5:30 p.m. Oct. 30 on the third floor of the Kraemer Family Library. Those interested in attending should confirm attendance by Oct. 27 by emailing to chancellor@uccs.edu.

Copies of the book will be available at the event for $19.65. They will be on sale at the UCCS Bookstore after Oct. 30.

Kempf co-authors ‘Safety and Security in Hotels and Home Sharing’