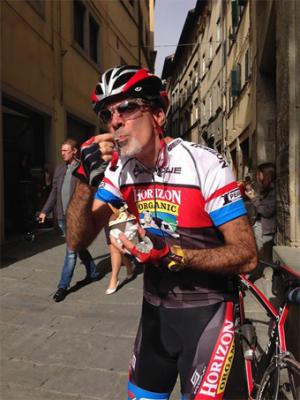 We live in challenging times, facing threats from terrorists, hackers who want to steal our important personal data, privacy issues related to personal drone use, and the results of climatic upheaval.

Steve Recca’s work has revolved around issues of security, from his time as a naval officer to positions with the Central Intelligence Agency, State Department, Defense Department and in academia. From 2006 until 2009, he directed the Center for Homeland Security at UCCS and taught one of four courses needed for a graduate certificate in security and intelligence. UCCS still offers the certificate. After working for the Department of Homeland Security, he returned to CU and the School of Public Affairs in 2014 to become executive director of the Center for Human Security. He still works with government agencies, often traveling to Central or South America for projects with regional and international activities. 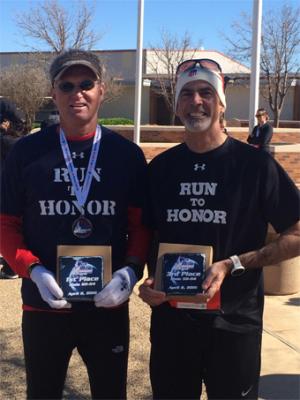 David Wayland, left, and Steve Recca at a recent run in Lubbock, Texas, where they honored fallen graduates of the U.S. Naval Academy.

“When I came to CU, it was the right time for a change,” he said. “It was a way to make a contribution to a different community built around the same themes and same topics that I’ve been dedicated to, and so I began a second career in academia.”

He calls his time at CU exciting. “My positive experience at CU revolves around the notion of meeting others who are open to new ideas. That sounds odd because that is normally part of what we do at a university. But here I often find like-minded individuals who place ideas over ideology.”

Recca is a runner, mostly on area trails, a cyclist and a lover of the outdoors. He’s on the boards of the local chapter of the World Affairs Council and the American Red Cross, which he finds an easy fit, because of his work in disaster management.

1. What is the mission of the Center for Human Security and how has it evolved?

The notion behind human security extends beyond what we think of as homeland security. Human Security considers ways people can be and feel more secure. In other words, we consider the critical elements that make you and me, our neighborhoods and our communities more secure and what makes us feel more secure.

The mission of the center is to enable conversations and activities to support that notion. A big part of human security is to move our thinking from a government-centric approach, and the idea that homeland security means that the “cavalry” will ride over the hill to solve our problems. But my experience in both security and disaster management is that, for better or worse, a lot of the responsibility for our own safety and security and how we feel about it rests with us as individuals. To that point, the center has held workshops, conferences and conversations covering topics such as United States-Mexico security, refugee placement and security concerns, and privacy and security around U.S. intelligence. I’ve also done other, smaller conversations on drones and on cybersecurity.

The center also connects the academic community at CU with the larger, off-campus community.

2. What do you consider to be the biggest threats to human security in the United States?

First we have to look at the word “threat,” which means something that has both capability and intent to cause harm. We tend to think of all perceived dangers or disasters – hurricanes, flooding, wildfires, earthquakes – as threats. But while these are very serious, they represent hazards; lots of capability, but no intent. So our preparation for and response to hazards is fundamentally different than for human-driven threats.

Now, and throughout history, we’ve faced a multitude of things we need to worry about. Right now, we face a difficult array of challenges and often have a hard time understanding them. For instance, terrorism, most recently in the form of the Islamic State, is – of course – a grave concern. We think of the San Bernardino, Paris and Belgium attacks and it’s hard to assimilate their meaning, either through an emotional or rational lens. Should we in Boulder, Denver or Colorado Springs think about this as a threat? The point is, terrorism is real and very dangerous and something we need to be aware of, but it probably is not the most significant issue we face.

Something else we might call a threat emerges from this wonderful information domain that we call cyber. Most of us have a hard time getting our heads around it. Should we be worried about a nation state like Russia or China launching a cyberwar against the U.S.? Should we worry about terrorists using it? Or should we be worried about criminal activity? We need all this technology: We shop online, bank online and communicate and share vast amounts of personal information.

We have extra anxiety surrounding these areas because we hear about them on almost a daily basis. There’s something about terrorism or a major corporation being hacked or credit card information, personal data and Social Security numbers being stolen, as reported in the news, that puts this concern in our face, all of the time. Some people are using these activities to commit crimes, while others threaten us and our everyday way of life.

But the greater challenges are those that are complex and long-term that will affect us in unknown ways. As the climate changes, we clearly need to think about how we will adjust. How will climate change impact our ability to earn an income, pay for our housing, get food at a reasonable price? There are other issues such as the health of global financial systems, or what happens if there is another large terrorist attack, or Iran develops nuclear weapons, or Russia invades a country or China goes to war. These events will impact our lives, even though we may not be directly involved. The stock market may rise or fall or the delivery of food and other supplies potentially will be affected.

So, long answer to a short question. My sense is that it is impossible to identify one greatest threat.

3. What can we do to make our lives and our communities more safe and secure?

First, we need to ask ourselves if we are good neighbors. Are we so isolated that no one knows us and we don’t know those that live around us? It sounds trite but the idea of the fantasy 1950s neighbors sharing a cup of sugar is important.

Engaging at the individual level, the family level and the neighborhood level – and in expanding concentric circles – and considering how we understand and work together builds a sense of capability that shoves aside the fear. It’s not rocket science but it does take effort and interest on our part. That illustrates human security.

It is important to understand that bad things can happen. Our credit cards might get stolen or our car might be vandalized. Or, we might be attacked by terrorists. The second part of human security is building resilience so we can adapt and respond when necessary because we know bad things can happen. How can we understand that things will happen and build some flexibility into our emotional well-being and be part of the solution rather than be a victim?

As an example, let’s take the recent Ebola outbreak. I don’t think Colorado was ever threatened with the crisis around Ebola. Still, if you are like me, you felt a little bit of concern or anxiety around the Ebola scare and how we felt about other people who were suffering. I wondered if it could happen to me and what I needed to be aware of. At times like this, you arm yourself with information and ask: “Am I really at risk for getting this? With the limited risk in our state, what might I do to prepare myself and my family and friends to protect ourselves from this threat?”

In answering your question about “how to respond,” you might wash your hands often; if you go to a hospital, you might wear a mask; if you think you have come into contact with anyone who is ill, you monitor your symptoms and you report them if they worsen.

Whether a pandemic, a natural hazard event or an act of terrorism, the best approach is to respond with resilience rather than fear. Take active steps to prepare for any eventuality through education and vigilance. If we see ourselves as part of the solution, we avoid becoming victims.

4. I recently saw that you participated in a discussion of drone ethics. Is privacy the biggest concern of the technology?

Yes, privacy is currently the focus of concern, but eventually, there could be a security aspect as well.  When you can mount a camera on these, you can video people who don’t know you are doing it. Some of the other issues with personal drone use are conflicts with other drones around the neighborhood, and interfering with commercial private aircraft and commercial aviation. These are regulatory – and potential security – issues that still haven’t been resolved by the federal government.

Another area of concern is considering what else drones can do, such as carrying a weapon, which means they have the potential to cause physical harm. Every great technology will be used for both good and nefarious effect. We will have to watch how this technology develops.

5. You’ve served in some interesting positions. What was your favorite and why?

I’ve spent a fair amount of time living outside the United States and that experience has colored my views. I tend to think that solutions are based on gathering information, talking to people and bringing people into the tent so that everyone feels they are part of the solution. I’ve served in a variety of capacities in Europe, Asia and Latin America and my general sense is that we do things pretty well in the U.S. One of those things we do well is listen and learn from others. That strikes me as the essence of human security.