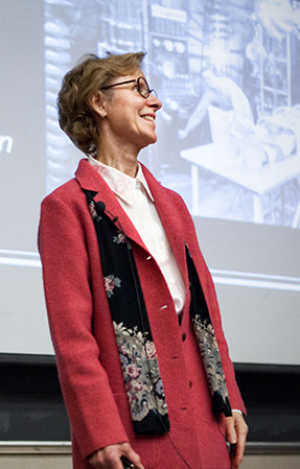 Why is it that something that made sense to reasonable people in the past doesn’t make sense now? How do people justify what they do?

Those questions interested Pam Laird and were central to her becoming a professional historian. After graduating from Harvard University with a degree in psychology, she earned a master’s degree in history from Tufts University. Following a presentation at an academic conference, she was encouraged to return to school for a doctorate.

“I finally did that when I was 38 and I graduated from Boston University at 45, which makes me a late bloomer,” she joked. “I was about midway through that degree when I moved to Denver. I taught as an adjunct for almost a decade after I finished my degree and taught on five different campuses.”

1. Is there a person or event that has influenced your career?

Of course there are a number of people who influenced me along the way, but the person I want to mention is Mark Foster, who was chair of the history department when I started here.

He hired me as an adjunct, and once I decided this was the place I wanted to stay, he urged me to improve what were then pretty bad conditions for non-tenure track faculty. He said, “Pam, you need to fix this.” I said, “I can’t fix this; I don’t even have a job here.” But he told me to figure it out and he would back me.

Mark basically made my career here. He gave me the opportunity to be a teacher and encouraged my scholarship with great enthusiasm. And he encouraged me to become an advocate for all faculty. I spent the next 20 years working for the university through shared governance.

Back in the mid-’90s, the salaries for adjuncts were very bad. There were adjuncts who had to make copies for classes using their own money. Many did not have an office or computers or phones. They had to meet students in the library. This wasn’t just at CU Denver; it was also in Colorado Springs, and, to some extent, Boulder.

Adjunct faculty members were then called honorarium faculty, a term the Regents have said is no longer appropriate. The argument that we made to change that was this: The term honorarium means a payment for someone to do something that is temporary and peripheral. But if you were an employee year after year, calling you an honorarium faculty didn’t make sense. I and a number of colleagues from around the system met in a task force that essentially rewrote the guidelines for non-tenure track faculty that included certain conditions, including access to an office. That report came out in 1999; now, every two years, the vice president of academic affairs requests that each campus reassess the issues related to non-tenure track faculty.

Things have gotten so much better; there’s a lot more respect for non-tenure track faculty, a whole new set of titles, and new positions that allow for recognition for service, research and scholarship. I think CU has been on the cutting edge of progress in this regard.

2. You have been honored with many awards throughout the years. Is there one (or more) that stands out for you? Why?

The one that really stands out is the mentorship award because so many people at the university and across the country took the time to write letters for me, and two people not in even in my college nominated me, which was amazing.

Mentorship fulfills a need that I feel to be useful, and frankly, this is an especially enjoyable way to be useful. One of the things I really believe – this is my cliché – is that citizenship gives us the right to make a difference in the place where we belong, and, conversely, we belong in the place where we can make a difference. So being able to work with wonderful colleagues who are emerging scholars and fellow citizens – all such good people -- is just incredibly gratifying.

At CU Denver, there is a mentorship program specifically designed for entering tenure-track people. Each new faculty member is assigned a mentor, and they meet regularly. But my colleagues know they can come to me at any time, and I’ll do the best I can to help them. If I can’t answer a question, I’ll have a pretty good idea of who can. There also are people who come to me who have been referred by a colleague, so I’ll get to know people who contact me through that network.

My mentoring ties together with this area of my work. The glass ceiling is a term people started using in 1986, after a famous article in The Wall Street Journal. (It refers to the barrier women and minorities face that keeps them from rising to upper levels of an organization.) People have struggled to figure out how to break through the glass ceiling. It turns out that it is impossible to break the glass ceiling from below. Former outsiders can only pass through that barrier if they are pulled up by mentors and gatekeepers.

That is the subject of my second book, “Pull: Networking and Success Since Benjamin Franklin” (Harvard University Press, 2006). In the book, I look at the concept of discrimination. Generally we think of discrimination in terms of what I call push discrimination, which means pushing people out of opportunities. For instance, someone shows up for a job and they are told there are no jobs available, but the next person is line is given an application. That’s push discrimination. About a decade after the Civil Rights Act of 1964, women and African-Americans recognized that while they could get entry-level positions, they could not get past that. They began to study sociologists who taught them the terms “mentoring,” “gate keeper,” “role models” and “networking,” among others. What’s amazing is that about 40 years ago, in the early 1970s, the only people who used those terms were sociologists and some people in education. Now it seems that we can’t get through an hour without using one of these terms.

It’s been a long process in which the courts and laws have had some role in integration, but they can only go so far.  To go further, there needs to be a process of building social capital – networks and connections and the like.

4.  One of your early publications “explains the transition from a national ethos that gauged merit by thrift and productivity to one increasingly dominated by consumption priorities.” How has the “consumption priority” changed over the years and what are the implications for the future?

There were a lot of cultural values in the past about savings and thrift. But now the consumer culture has made it more attractive to be known by what we consume rather than what we produce. These are overgeneralizations, of course, but the point is that values have shifted for both individuals and firms. A century later, the economic structure has come to encourage what is called financial capitalism as opposed to industrial capitalism. Within the financial capitalism system, the best way to make money is by manipulating finances. The economic system rewards speculation instead of production, and it still encourages consumption.

Periodically there will be a crisis – like the one in the 1970s or 2008 – that encourage people to impose limits on their own consumption, but the rubber band generally springs back. There are some who take on a self-imposed reduction; they simplify their lives and build a foundation for retirement. They are in the minority, though.

5.  What research projects are you currently working on?

I’ve got two things going on right now. One of them ties in with civil rights and what I mentioned about the glass ceiling. It’s basically about the limits in what the law can do in terms of changing cultural values.

The other project is about the roots and consequences of the self-made man symbol. I have found that there are psychological consequences of the self-made man idea: It can make people who started off with advantages very arrogant. They might have been born on third base, but they think they hit a home run.  Then there are people who didn’t have those advantages and who think that if they are failures it is their own fault.

There are several psychological consequences of this in terms of generating despair and generating arrogance. There also are policy considerations. If we believe that the poor are poor because they deserve to be poor then why should we do anything about it? Why should we change our policies or programs to give people assistance? If we think people are rich because they deserve it, then we shouldn’t tax them. So we cut back taxes on the wealthy, and we use the rhetoric of self-made success to justify that even though these people were mostly born on third base.

It turns out most of the increases in income and wealth in the last decade or so have been made by people in finance rather than in production. People make money shipping our jobs overseas and putting money into financial investments, and we give them credit for making a lot of money even though they are just doing it by manipulating paper.

Historically, the self-made concept meant the opposite of what it means now. It actually began as part of the Protestant Reformation when people were considered self-made if they improved themselves to serve faith and their community. Benjamin Franklin, for instance, believed his purpose in life was to improve himself to benefit his community. He started an early public library, the Philadelphia fire department, and multiple schools. He was a great scientist – the most famous American scientist of the 18th century – and he did this as a citizen. He actually refused to get patents on his inventions of the Franklin stove or bifocals or the lightning rod. He could have gotten stinking rich but he didn’t.