Regent Linda Shoemaker remembers what it was like to work at CU Boulder’s news bureau during her time as an undergraduate. While walking the halls of the offices of the Board of Regents, she felt a bit intimidated. Whereas today … 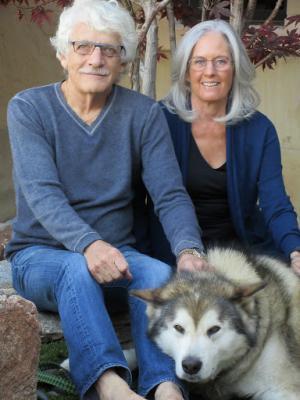 Linda Shoemaker with her husband, Steve, and their Alaskan Malamute Kodiak. “I lived on Kodiak Island when I was a child and have a great fondness for Alaska,” she says. “We go there often.”

That isn’t likely. The Boulder Democrat, elected to the nine-member board in November 2014, has long fostered strong connections to CU since earning her bachelor’s degree in journalism. Her service stints include the CU Boulder Journalism Program Advisory Board, the CU Foundation Board of Trustees and the CU Advocates program.

Shoemaker’s past experience in K-12 education – she was elected and served as president of the Boulder Valley School District Board of Education – is one influence on her perspective as a board member. Another is her ability to compare and contrast her college experience with that of today’s student.

“On the campaign trail, I would talk about the ‘Two Lindas,’” she says. “I had a small amount of money from my grandmother, but I worked throughout college and graduated early with no debt. If I were in school today, working the same number of hours, I would have come out with over $30,000 in debt. That’s the difference between state support for higher education then and now. And minimum wage has not kept pace, either. So it’s much harder for students today to do what I did.” 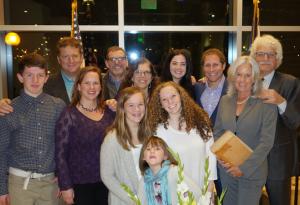 Shoemaker with family at her 2015 swearing-in ceremony. “I'm holding the book I was sworn in on – a rare Colorado statute book from the CU Boulder Law Library.”

Shoemaker has lived in Boulder since moving with her military family while in high school. She and her husband, Steve, raised their three children in Boulder and now are the grandparents of five. She enjoys hiking and riding her electric bicycle, and hopes to find time to revive her hobby of making jewelry.

“I used to do that before I decided to run for regent, and I would love to get back to that,” she says. “It’s been more time-consuming serving on the board than I had expected.”

1.What are some of your other memories from attending CU in the 1960s? 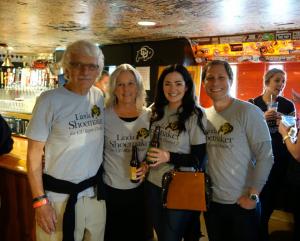 Shoemaker celebrating during the campaign at the Sink in Boulder with husband Steve, daughter Emily and son-in-law Evan.

I was working really hard. I was not into partying. I was definitely into protesting. And those were the days when we were having lots of sit-ins and teach-ins protesting the Vietnam War. I remember marching on Regent Hall once. I don’t remember what we were demanding! It was just kind of what we were doing in the day.

I organized a protest one time in the dining hall. They had a rule that women had to wear skirts to dinner on Sunday nights in Farrand Hall or they wouldn’t be served. I got all the women to wear pants under our skirts. They did change the policy. That protest was pretty lame. But I wanted to eat! I wasn’t going to protest by sitting and not eating.

2.You were earning your journalism degree at the time. What is your impression of the development of the College of Media, Communication and Information (CMCI)? 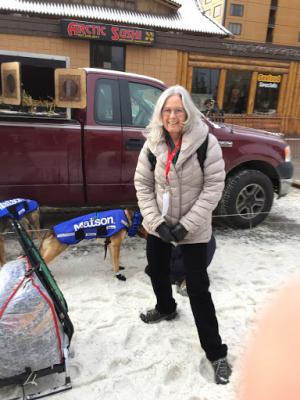 In Alaska for the start of the 2016 Iditarod dog sled race.

It’s fantastic – I’m really happy. I was on the citizens advisory committee for the journalism school and I agreed with the discontinuation. It’s just very unfortunate we actually had to kill something in order to build something stronger. It was necessary to get out of the silos that were in the old School of Journalism and Mass Communication (SJMC). I was also the spokesperson for that committee throughout the process of reconstructing the journalism program, which took three years. I saw up close the sausage being made.

There were a lot of different proposals before they arrived at the final configuration that’s now at the College of Media, Communication and Information. It’s going to be more interdisciplinary. Overall enrollment in the CMCI is now more than double the enrollment in the former SJMC. That has been a fantastic move for the campus.

3.You lead the regents’ Strategic Planning Committee, and you have discussed increasing the efficiency of Board of Regents meetings. How are you and the committee addressing that? 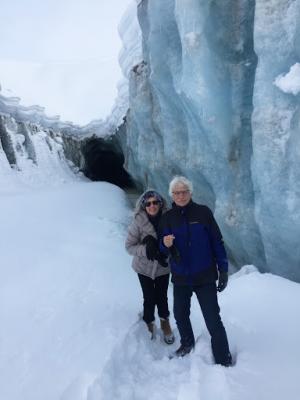 We are going to reorganize the committee structure so that we have fewer committees with broader charters. We’re trying to be more interdisciplinary, just like we’re asking our campuses to be.

Currently, a tremendous amount of time at board meetings is spent on reporting. I’m one who feels, you know, we all know how to read! And if we’re presented with material in advance, we can have a more interactive conversation at the meeting. Regents want to have conversations with leadership so we can build a stronger system together.

We can’t make our board meetings longer, but if we can push some of the reporting into the written part of our operation, and push some of the preliminary decisions down to the committee level, we can free up time at the board level for more strategic discussion about the future. That’s the goal.

There are only nine regents, and we have more than 20 meetings a year when you add committee meetings to board meetings. That is really too much for regents who have jobs. This is supposed to be volunteer, part-time service. It should be very focused at the governance level, not at the management level. We have staff to do that work. What we need to be doing is what only the regents can do, which is overseeing the budget, the president, longtime strategic planning and policies.

I would like to see us be more nimble. I think the problems in higher education nationally are really difficult – costs are out of control, we’ve got to keep tuition down but quality up. The only way to do that is to be more innovative and think outside of the box. Our campuses are doing that. I want to hear more from the campuses about how they’re doing that – how they’re morphing to meet the challenges our students have today.

4.The board completed its annual summer retreat in July. What was your takeaway?

At the retreat, we found that the Board of Regents is interested in looking at the question of, what is the CU system beyond the amalgamation of the four campuses? For instance, we have four strategic plans, one for each campus. But we don’t have one at the system level. So the Strategic Planning Committee is looking at that now. We’ll look at each plan and determine at what they have in common: “Innovation” is in every single one of them. “Community” is in every single one of them. These are some of the common values we share that could be put into a short, pithy statement of who we are as a system.

I also think we found at the retreat that our system is in a really good place right now. We have spent the last 10 years cutting budgets and identifying efficiencies. Because we were the first state to hit bottom in state funding for higher education, about 5 percent, we know how to do this. We can figure out how to cope with low funding but still provide excellent education at a fair price. A lot of other states are struggling now because they’re where we were 10 years ago.

5.You are one of the newest regents, but after the November election, you’ll no longer be a “rookie.” What advice or guidance might you share with the new board members who will be joining you?

I’ve thought about it, because orientation of new regents is in the purview of the Strategic Planning Committee. We’re trying to design something that will help the new regents be as comfortable as possible making the decisions they’ll have to make from day one. Regent Sue Sharkey suggested having a buddy system, which hasn’t existed before. Even though there are only nine of us, we think it would be helpful to have a more experienced regent assigned to each of the new ones. The regents’ office does an excellent job of orientation and we meet with every department here at 1800 Grant. But it’s still an overwhelming amount of information that you have to absorb.

It’s a much more complex system than I realized before I was elected. I was pretty familiar with the Boulder campus and I’d also been on the board of the CU Foundation. I’d been speaking to the Board of Regents about the journalism school. So I thought I really knew what I was getting into. But it’s more complex and time consuming.

It’s also more fun. I just love learning about the research and teaching on the campuses, and I love interacting with students.

Tagged with:
Linda Shoemaker, Board of Regents, College of Media Communication and Information