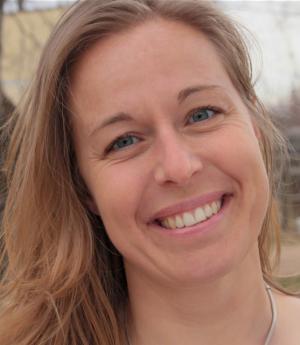 Katja Friedrich has tolerated freezing temperatures, hail storms, pouring rain and tornadoes, all in the name of science.

The associate professor and associate chair of the Department of Atmospheric and Oceanic Sciences came to CU Boulder in 2008 and researches cloud physics, their formation and precipitation, in order to deepen the understanding of – and help populations deal more effectively with – the complexities of storms.

A recent research project took her to the Payette Mountains of Idaho to examine the efficacy of aerial cloud seeding in a project dubbed SNOWIE (Seeded and Natural Orographic Wintertime Clouds – the Idaho Experiment. The results of the research, conducted with colleagues at two other universities, and funded by the National Science Foundation (NSF) and Idaho Power Company, played a role in the recent decision to begin cloud seeding in Jackson County, Colorado.

Friedrich is analyzing mounds of data from the three-month project, which she calls revolutionary for its findings. The SNOWIE project also was a great experience for students, who managed the measuring instruments while the principle investigators oversaw the entire operation.

“We coordinated the aircraft with the ground-based operations,” she said. “When I was younger, I really loved going up and staying at the radar station, but this time, the students did it and they loved it. They went up the mountain on snowmobiles and stayed in a little heated trailer we had stocked with food. For them, it was a super-adventure.”

For the first time, Friedrich and fellow researchers observed the chain of events that led to precipitation after cloud seeding. “No one has ever clearly shown what we did,” she said.

“We always end up with these winter experiments where it is cold and dark and miserable,” she joked. “I always try to conduct an experiment in the tropics where it is nice and warm, but all my attempts to convince the NFS to give me money have failed so far.”

1. How are clouds formed and how does cloud seeding create precipitation?

People may have heard of cloud seeding thunderstorms to suppress hail or seeding hurricanes to make them spin slower and therefore reduce the intensity.

In the SNOWIE experiment, we seeded orographic clouds, which form in the mountains as air is being pushed up and cooled and form tiny water droplets that are too light to fall to the ground. If you didn’t seed these clouds, they would probably continue to move further to the east or evaporate, or maybe, eventually precipitate.

The idea is to get the water out of these orographic clouds onto the ground to increase the snowpack. We spray silver iodide into these clouds and it merges with the droplets and forms ice crystals and become big enough to fall to the ground. We use silver iodide because its structure is similar to the structure of an ice crystal.

2. Is the silver iodide harmful to the environment?

Studies in the ’80s looked at natural silver levels and silver levels from cloud seeding that ended up in ground and river water and whether it was harmful. The studies found that there was an increase of silver in the water, but it still was at a level that is harmless to human beings, plants and animals.

That being said, it always depends on the quantity used. When you seed clouds, it usually is just several grams of silver iodide that is distributed over a wide area. And if you think about snowpack, you aren’t seeding every storm, so the snowpack from natural storms is a much higher percentage of the resulting water.

However, I don’t think we should give everyone a blank check. If you do cloud seeding, you have to check the water as well. I don’t think the entities that are doing cloud-seeding are doing this without environmental regulations and oversight.

Right now, cloud seeding is being used in Idaho, Wyoming and California. Wyoming and Idaho are seeding almost all of their mountain ranges in order to increase the snowpack, including to get more water into the reservoirs they use to generate hydropower. Colorado has been much more conservative but is now ramping up their operations this year, too.

3. Your team partnered with a power company in Idaho for the SNOWIE project. What did your research entail and what did you find?

Cloud seeding has been going on since the 1940s, but the problem has been that we couldn’t really show the process. It works in the lab, the physics works, but there are constraints in the field: You need to find super-cooled liquid clouds; you need to inject the silver iodide into the cloud, but it only works in a certain temperature range; and it is expensive. So far, it hasn’t been shown that cloud seeding really increases the snowpack. However, private companies have continued to do the cloud seeding, claiming that it does increase snowpack.

The problem is that often private companies were doing the seeding and the research. That’s changed over the past five to 10 years. The companies now outsource their research to independent entities. I think this is where we came in with SNOWIE.

What we really showed was the entire life cycle of the process, from the time we injected the silver iodide into the clouds to how it falls to the ground. You might wonder, why, after 80 years, we haven’t seen that yet, but that is the case. What we showed was revolutionary and we can say that cloud seeding actually works if you do the right things.

With the data we recorded we can quantify how much snow we can produce, which previous research hasn’t shown. Since we are producing these seeding lines and they pass over our precipitation gauges, we can now say we are producing a certain number of millimeters of precipitation and we can actually calculate this over an entire area.

We used ground-based radar and aircraft cloud radar to see the cloud droplets and snow. The funny thing is that our proposal to the NSF was that we needed funding to obtain a data set so that we could run a numerical model. When you place seeding material into the atmosphere, you basically are disturbing the experiment because you don’t have a reference. We don’t know how much precipitation we would get with seeding or without seeding. That’s why we need the data sets to evaluate and run our models. It was a coincidence that we actually saw the entire chain of events from releasing the silver iodide until precipitation hit the surface.

We didn’t see a substantial increase in precipitation, but you need to look at the total over an entire season for a true measurement. But because we didn’t have any background precipitation, we knew that all the precipitation we produced was from cloud seeding.

In the Southwest, where we currently are under drought conditions, every millimeter of water counts. Cloud seeding is very expensive, but as water becomes more expensive, cloud seeding makes sense. But cloud seeding is just one piece of a much bigger picture that also includes water conservation and water management.

4. A few years ago, your research had you chasing tornadoes. Is this still an area of study for you?

I’m not chasing tornadoes anymore, but I have another really interesting project going on: our Colorado Hail Accumulation from Thunderstorm project or CHAT. In the summer we have storms in Colorado that suddenly drop a foot of hail. We call them plowable hail storms because you have to get the snowplows out to clear roads and get cars out of these hail drifts. Our research is trying to understand why these storms produce so much hail. You might think it is because they move so slowly or that it is related to the terrain, but it is more complex than that.

We’ve been working with the National Weather Service on this for about five years. We are looking at ways to use radar data and other indications to be able to alert people before these storms produce a large amount of hail to help coordinate emergency vehicles. Through CHAT, we want to identify and forecast hail accumulations.

We have a lot of people on the ground who give us hail depth reports and we have developed an algorithm to help determine in real time if thunderstorms will produce hail and how much. The weather service already is using the algorithm.

Initially, we thought these types of events were outliers, but we’ve found there are lots of these events and they aren’t just limited to Denver and the Front Range. Texas and South Dakota have similar problems with hail, for instance, and we’ve found this is a global problem as well. It’s a fun project and has high impact.

Another project we’re working on is determining how thunderstorm outflow boundaries affect wildfires. As thunderstorm precipitation falls to the ground and evaporates, the cold air associated with it spreads into a gust front and those fronts can interact with wildfires. First, they change the nature of these wildfires because they provide the fire with oxygen-rich air, but they also change the wind direction, which has a big impact on firefighting. There have been a lot of firefighter casualties because suddenly these gusts come toward them pushing the fire into where they are working.  We’re using a numerical modal developed at NCAR and we’re validating whether the model is capable of reproducing these kinds of conditions. The difficulty is that we don’t have a lot of observations in the mountains, so the only reliable source is the numerical models, which aren’t very accurate. We are validating whether or not we can use the models.

5. These types of research projects always have interesting names. How important is it to have a catchy name and which came first, the term SNOWIE or Seeded and Natural Orographic Wintertime Clouds – the Idaho Experiment?

Names are super, super important. First, a catchy name helps identify your experiment from all the others that are being conducted, so we spend a lot of time on coming up with a name. You have to have a catchy title that implies what you are doing so it can be a difficult task. In this case, we had the idea of the type of research we wanted to conduct first and then came up with the name SNOWIE over dinner.

Tagged with:
Atmospheric and Oceanic Sciences